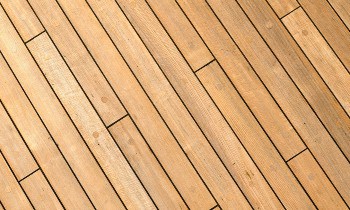 Are you planning to build a deck and trying to determine the layout for the deck boards? Dimensional deck lumber is commonly available in 8, 12, 14, and 16-foot lengths. If the deck is longer than 16-feet or you plan to use shorter lengths, it’s good to know how to stagger deck boards.

To stagger deck boards start at one corner of the deck with a full board perpendicular to the joists. Measure, cut and lay the next plank end to end with the first so the two butting ends are centered on a joist. Use the cut-off piece next to the full plank to begin the second row. Repeat the alternating pattern. 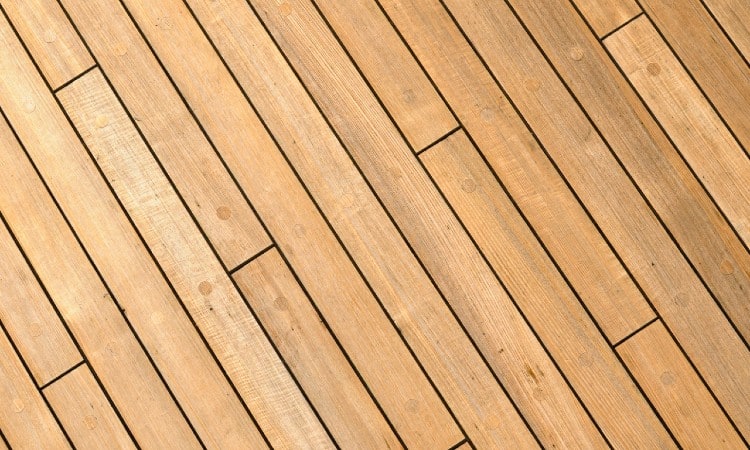 Why Do You Stagger Deck Boards?

Deck boards provide the finishing touch for a deck. They are what everyone sees, what they walk and play and sit upon. They are the dressing for the framework that supports and are the visible aspect of the deck. Staggering the seams or butt joints where the boards meet is an important part of how to lay out the deck boards.

Staggering the deck boards decreases the number of screws or nails going into one joist, which can weaken or rot the joist more quickly. Staggering the joints strengthens the deck by spreading the seams across more joists instead of placing the stress on only one. Plus, it is more aesthetically appealing to create a staggered or repeating pattern.

Deck boards are available in 8, 12, 14, and 16-foot lengths, which means it’s not necessary to have seams unless the deck run is longer than 16-feet. However, many people prefer working with 8-foot lengths as they are easier to transport and may have fewer imperfections than the longer planks.

If all the seams on a 16-foot deck are in the middle at 8-feet, it will make it look like two decks side by side. Additionally, the two sections would flex and move at the seam as people and pets move around, weakening the deck as the two halves try to separate. Staggering the joints spreads the stresses and makes for a stronger deck. 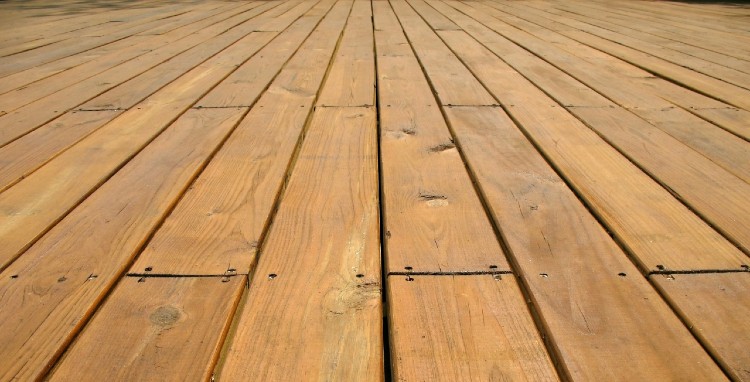 Staggering deck board joints means they don’t all occur on the same joist and make it look like you have two decks side by side. Staggering not only looks better but also strengthens the deck. The length of the deck and boards being used are prime considerations, as is the spacing of the joists.

The standard 12” or 16” on center joist spacing determines the placement and length of boards to ensure the plank ends are supported. Decks that are an even number of feet long often generate less waste lumber and make joint distribution easier. A deck that has joists at 12” centers makes it even easier.

Although deck boards are available in 16-foot lengths, 8-foot planks are more commonly used for ease of transportation and handling, and quality selection. It is better to have a plank span two full joist gaps (24” or 32”). Spanning only one gap (12” or 16”) adds stress to the board and fasteners when weight is applied in the middle, which can also be dangerous.

Deck boards are commonly laid perpendicular to the joists. If the deck run is longer than the plank length, then more than one board will be needed per row. The length not covered by a full board (or two) helps determine the pattern and the amount of waste. Depending on the joist spacing, an 8-foot length can be cut into four 24-inch, three 32-inch, or 2-foot and 6-foot lengths.

Fastening planks to joists is a straight down connection, except where two ends share or split a joist for support. To keep the screws or nails at least 1/4″ from the end of the board means they need to go in on an angle.

Butt joints should have 1/8” between boards for swelling and will have four or six fasteners going into the joist. The more joists the joist splitting – two ends sharing a joist – can be shared between, the better, which is where the staggered pattern comes in.

The joint pattern is more visible the deeper the deck – front to back or joist length – so it may be possible to create a diamond, step, or random pattern with the joints. If the pattern is random or very simple, lay the first two or four rows out on the deck before fastening. For more complex patterns like a diamond, it may be easier to put it on paper first.

On a 12-foot deck, the following pattern would work for joist spacing of 12” or 16” – a row with an 8-foot and a 4-foot, and then a row with a 4-foot and an 8-foot. The two-row pattern repeats, and there is zero waste. Alternatively, use 12-foot planks and have no seams.

How to Stagger Deck Boards

Divide the length of the deck by the length of the lumber being used. Check the distance between joists – 16” or 12” centers. Each row uses a full-length plank (or more), and the remainder of the row is cut from a whole piece. The unused portion of the cut piece is then used to start the next row, or is too short and becomes waste. On a two-row pattern, the deck board joints should not line up side by side, but alternate from one end or the other.

Stagger the deck board joints to design a pattern of seams that gives the aesthetic look you want and will improve stability, and minimize waste. The length of the deck and planks being used, coupled with the joist spacing, determines if you need to stagger deck boards or not.

You may also choose to double up the joists where joints repeat. That will reduce the number of fasteners per joist on a two or three-row repeat pattern, and improve structural strength and stability.

Decks that are an uneven number of feet, or extend inches past the foot mark, will produce more waste than full, even-foot length decks. A 20-foot deck using 8, 12, or 16-foot planks has almost no waste while a 20’-6” deck or 21-foot deck will. Depending on the accuracy of the joist placement, you may even need to trim all the planks.

Begin at the corner of the deck at the outside edge of the rim joist and lay out the first plank perpendicular to the joists. It should go to the middle of the joist closest to its full length. Make sure it is still fully supported on the joist at the opposite end too. Planks in each row will butt or join in the middle of a joist or at the seam between double joists and need to be fastened into place.

Once the planks butt together, sealing the joint will be difficult. A good practice is to make the cuts necessary for six to twelve rows and paint the cut ends with wood preservative before installing.

The greater the number of joints, the higher the risk of moisture damage and rot. Additionally, it’s a good practice to cover single or double joists where planks butt together with tar paper or self-adhesive bitumen membrane to prevent moisture damage.

How to Stagger Composite Deck Boards

When planning to use composite deck boards, it is important to determine how to stagger the joints as it can affect the joist structure. When laying out the joint pattern, begin at the outer edge of the rim joist and consider using the factor of 4 – doubling joists every 4-feet and having the pattern be 4’-8’-12’-16’-20’- etc. Using 4, 8, 12, or 16-foot planks will always ensure the joint occurs on a double joist.

Composite deck boards can be used in similar ways and locations to wooden decking. However, it is important to follow the manufacturer’s instructions when installing composite decking. The decking is more susceptible to temperature fluctuations that can cause buckling, so joint spacing needs to be considered.

Manufacturers may recommend the use of hidden metal or plastic fasteners or the use of reverse thread screws instead of wood screws for securing composite decking. Wood screws can create a mushroom around the screw head as they are driven into the plastic material. Reverse thread screws are used in the same manner as regular screws into the plank face but eliminate the mushroom effect.

Hidden clips are inserted into a groove in the plank edge and fastened to the joist framework. This system allows the plank to expand and contract with temperature fluctuations without pushing against the joists, or buckling the plank.

Although two clips can be squeezed onto one joist at a joint, it is better to double the joists where seams occur. The clips should be an inch or less from the plank ends, and there should be a minimum of 1/8” gap between the board ends.

It is suggested that when using clips, not to tighten the screws down until the next row is in place. This will make it easier to get the clip into the next plank groove. The screw can be tightened once the next row of clips is partially fastened.

When doubling joists, make sure the two surfaces are level and well fastened together, so the two plank ends also stay level. To protect the joist structure from moisture damage, use a self-adhesive butyl membrane or tape on the support structure.

It is important to know how to stagger deck boards for a more stable and aesthetic finish, and to minimize waste. Whether using a two, three, four, or more row pattern, the fewer butt joints on one joist, the better. The pattern for staggering end joints for both wood and composite decking begins with the joist layout – 12” or 16” centers and double joists affect where joints occur, as does board and deck length.

I hope you now understand why staggering deck board seams is a good practice, and how to come up with a pattern that spreads the joints across more joists. If you found the article helpful, please share it with others who may find it of interest. Your comments and suggestions are always appreciated.