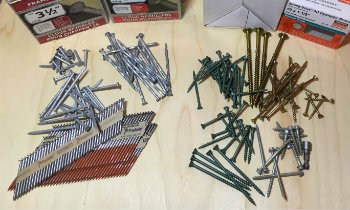 Building a deck can be a challenge, especially if you’re not sure whether it’s a job for screws or nails or both. Wondering what the benefits of each are? Your fasteners are an essential part of ensuring that your deck remains solidly standing for many years to come. As such, knowing when and where to use nails and screws is essential as you plan for your deck’s construction. So, nails or screws for a deck: which is better?

In this article, we’ll look at the pros and cons of screws and nails and how each should be used when constructing a deck. 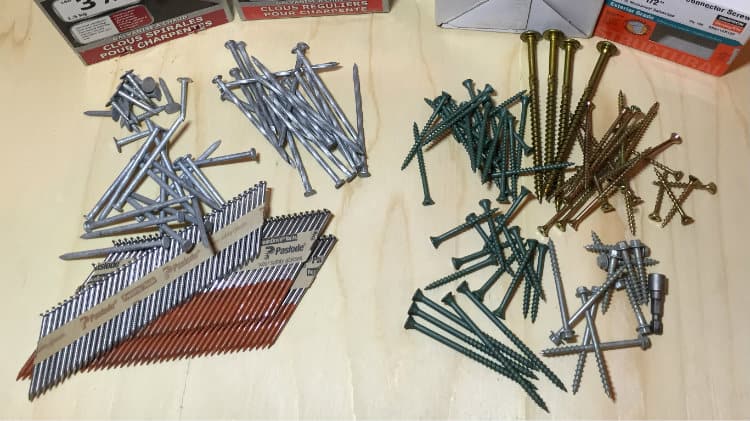 Nails or Screws for Deck Building

While nails have always been a necessity for at least part of the construction of a deck, there was a time when screws were just too laborious to consider. Before the invention of power drivers, nails could be pounded in quickly with a hammer, while screws required pilot holes and hard-to-use manual drivers. Nails hence were a much faster means of assembling a deck.

With the invention of the power driver, that quickly changed. With a power driver, screws could be driven into the wood quickly and with less effort, making them the fastener of choice for decking. Enter pneumatic nailers, which are faster than power drivers, and now nails again offer the speediest option for deck assembly.

Aside from speed, there’s also cost to consider. Screws are generally more expensive than nails. A one-pound box of 10D three-inch galvanized nails will run you about $6 while a one-pound box of three-inch deck screws will cost you about $10. That cost difference can be significant when you figure you might need upwards of 20 pounds of screws for a 400 square-foot deck.

However, as we all know, speed and cost can often come at the expense of quality, and that’s the case here. Rather than considering what will get the deck built faster and cheaper, consider what will build the strongest and safest deck.

At first glance, screws seem to be the overwhelming choice when answering the question of nails or screws. Screws are threaded, which means they bite into the wood as they are being driven in.

The shaft of your standard nail, meanwhile, is smooth, which of course allows it to be pounded into the wood with a hammer or propelled in with a nailer.

Keep in mind that your deck is outdoors and thus will be subject to intense weather conditions that will cause the wood to swell and contract continually over its lifetime. Screws will hold tight in these conditions while nails will begin to loosen and pull out.

Screws also have a few more advantages over nails. The driving process associated with screws causes the two materials to be pulled tightly together when the screw is driven in with a power driver, resulting in a stronger connection.

Screws can also be removed much more easily, which is significant as you consider future repairs to your deck. If a piece of decking is damaged or begins to rot, for example, it’s much easier to remove the screws with a power driver and replace the board than it is to pry the damaged board loose.

While screws have many great advantages, you shouldn’t skip the nail part of the hardware aisle when shopping for deck fasteners. Nails do play an important role. Screws do have more tensile strength, but they are also much more brittle than nails.

Who hasn’t had the experience of breaking off a screw head while driving a screw into a board? Nails, on the other hand, may bend, but they won’t break.

Exactly. That’s why you want to use nails to attach your framing. More specifically, you need to use nails in tandem with deck hardware when attaching your joists to beams.

If you’re dead set on using nails for your entire project, you might consider ring shank nails for your deck boards. These nails have threads on them similar to screws that are designed to prevent the nail from pulling out. These nails arguably have more holding power than screws.

However, if you are looking at nails as a time-saving option, this may not be it. Ring shank nails are harder to drive even with a pneumatic nailer because of their rings.

You can also forget about easily removing these nails because they are designed never to pull out. Attempting to remove a ring shank nail will likely do irreparable damage to the wood you are removing it from.

You might be tempted to use spiral nails. These nails have threading that is designed to improve the boring ability of the nail into the wood as well as its staying power.

Avoid these. These nails are specially designed to drive into hardwoods, which can be hard to nail into, and will split softwoods.

While nails and standard deck screws will do the job, if you are looking to by-pass all that hammering, you might want to consider structural screws such as those made by Simpson Strong-Tie. These screws are a little beefier than your normal deck screws, making them as strong as 10d and 16d common nails.

Unlike normal deck screws, these screws are load rated, meaning that they, like nails, are made to carry the weight of your deck.

What makes them so strong? They are made out of high-quality steel that is much harder and stronger than the material used to make lag bolts and other screws. And unlike nails, these screws can be quickly driven into place using your standard 18v power driver.

The advantages of using structural screws are obvious. They can help you save time and your arm. Of course, there’s always a trade-off. And the trade-off here is cost.

Unless you’re willing to spring for structural screws, you will likely need both fasteners in your arsenal when doing your deck build. You’ll need nails to ensure the strength of your framing and screws to make sure your decking stays put.

So, rather than thinking nails vs. screws, think of this as nails and screws working harmoniously together to create a sturdy and durable deck.

That said, be sure to take a look at what your local building code requires. Make sure you comply to avoid any possible problems when you have the project inspected, or when you decide to sell your home.

When to Use Nails or Screws for Deck Building

Now that we’ve figured out what to use let’s get into the nitty-gritty. Where do we use nails? Where do we use screws? And what sizes do we need to have to get the job done right?

Framing the deck is where the nails in your project will take center stage. Unless you’ve gone the structural screws route, you will need nails for the framing that is built on top of the deck’s beams and posts.

Of course, you won’t be using nails alone. You will use nails with deck hardware, hangers and brackets to help secure your joists to the beams.

Deck hardware serves as a guide to the number of nails you will need for each bracket. If the bracket has six holes, you will need to secure it with six nails. Don’t skip holes. We’ll get back to why this is so important in a moment.

That sounds simple enough. But what kinds of nails should you use? You will need 1-1/2-inch galvanized joist hanger nails, which, as it sounds, are compatible with the joist hangers you will be installing.

You will also need 10d galvanized nails and 3-1/2 inch-long 16d double-dipped galvanized nails, both of which you will need for your joist hangers. The 16d nails will fasten your hanger to the wall ledger while the 10d nails will be nailed through the side flange of the hanger into the joists.

This part of your deck construction is labor-intensive. The tight spaces and use of hangers mean the only option for driving these nails in is your arm and a hammer. The job can quickly turn your arm to rubber but resist the urge to skip holes.

The hangers are designed to use enough nails to support the weight of your deck. Skipping holes will compromise your deck’s structural integrity.

It is also important that you get the right length of nails. You need 3-1/2 inch-long 16d nails to assure adequate strength for this job. Additionally, remember that your deck will be facing the elements. Make sure you’re using double-dipped galvanized nails to prevent rusting and future disaster.

Once you’ve completed your framing and you’re ready to move on to the decking, it’s time to switch to screws. Remember, you’re using screws at this stage to ensure your decking stays put for a long time, so avoid the temptation to reach for your pneumatic framing nailer unless you plan on using ring shank nails.

Whether you decide on standard deck screws, stainless steel or structural screws, you will need 3-1/2″ deck screws to secure your boards to the framing. As with the nails, make sure you purchase screws that are rated for outdoor use.

If you are using a hidden screw system, such as the CAMO hidden deck fastening system, make sure you purchase the screws that are compatible with that system to ensure proper installation.

Building stairs for your deck is a job for both screws and nails. You’ll need 1-1/2-inch hanger nails to attach the stringers to your deck using angle brackets.

As with your joists, stair stringers are supporting a load, which is why you want to use nails instead of screws to attach them to your deck. Remember, nails bend but won’t break like screws.

As with the deck boards that make up the floor of your deck, you need to use the same 3-1/2-inch deck screws to attach the stair treads to the stringers.

You’re nearing the end of your deck project, and you’re ready to add the deck railings and balusters. This is another job for screws.

We’re using screws here because they will create a tighter fit and will be less prone to pulling out, creating a dangerous railing. Since your railings aren’t load-bearing, you don’t need to worry about the screws breaking.

It’s hard to overstate how important it is that the right fasteners are used when constructing a deck. Fasteners play a huge role in determining just how structurally sound, and hence safe your deck is.

Do not cut corners here. A quick search on Google or YouTube for “deck collapses” shows just how catastrophic the results of using the wrong fasteners can be.

A deck frame compromised by the improper use of nails and screws can result in the sudden collapse of your deck structure, resulting in potential injury or even death.