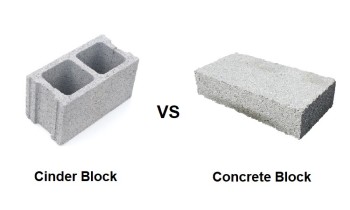 Building a fire pit, retaining wall, cold cellar or foundation wall, requires planning and the proper materials. Choosing cinder block vs. concrete block may determine how strenuous the build will be, and how long your project will last. Your success may be in their differences.

Cinder blocks are light-weight low-density building blocks made of cement and coal ash. Concrete blocks combine cement with sand and gravel, and a small percentage of cinders. Cinder blocks lack the strength and resistance to weather and pressure that concrete blocks possess, and aren’t recommended for many load-bearing jobs.

In this article, we’ll explore cinder and concrete blocks, their history, specifications, uses, and compare the different types currently available. By the conclusion of the reading, you should have a better understanding of which type of block to use for your project.

The art of making concrete, invented by the Romans around 300BCE, was lost when their empire fell. The redevelopment of concrete began in 1756, but the modern formula wasn’t patented until 1824. Although not as durable as the lost Roman formula, it was more portable and less expensive than quarried stone blocks.

From the 1830s onward, different patents were issued for concrete block making machines – some of which produced blocks weighing 180 pounds! In 1889, a mold for solid concrete blocks was issued to Harmond S. Palmer of Tennessee, and in 1899 he patented the hollow concrete block machine. These blocks were lighter and less expensive to produce and are the foundation of the modern concrete block.

Hand casting 1,200 to 4,000 blocks for a foundation, however, would have been labor-intensive, grueling back-breaking work for two people over several weeks. A highly automated cement block plant today can easily manufacture several 1000 blocks an hour, ensuring concrete blocks are readily available for multiple projects.

What Is a Cinder Block 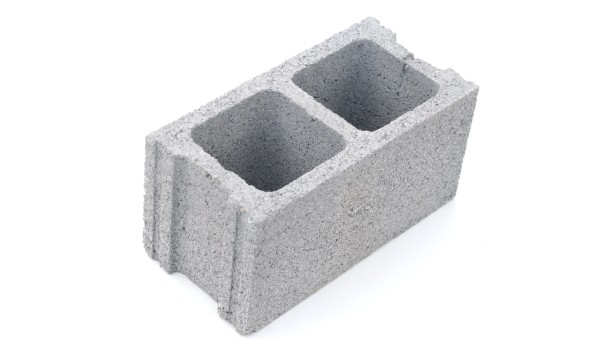 Cinder blocks are light-weight low-density construction blocks, or concrete masonry units (CMU). They are manufactured from a mixture of Portland cement and an aggregate of cinders from burned coal; hence, their name. The mixture is poured or pressed into molds and either heated to dry, or air-dried. Cinder blocks commonly have two or three hollow cores in the middle.

Portland cement, invented in 1824 in England, is made by heating limestone and mineral clay to form clinker, which is then ground into a powder and mixed with 2% to 3% gypsum. The cinders are the fly or bottom ash left from burning coal for different purposes. The fine ash is also known as breeze in the United Kingdom, which is why they are called breeze blocks in the UK.

The process of using coal ash was invented in 1913 by Francis Straub, a brick mason in Pittsburgh, who had experimented with waste ash from the coal and steel plants as an aggregate to produce a lighter brick. After several years of experimenting, he arrived at the best mixture ratio, and the cinder block was born. The blocks are light-weight, provide some insulating value, and nails can be hammered into them.

Masons found the lighter weight easier to lift and maneuver on scaffolds, or for lifting and threading over rebar. The hollow cores make it easy to reinforce the cinder block construction by filling the cores with concrete.

The fireproof blocks were used in all facets of construction, from foundation to interior walls. Cinder blocks had many uses in the construction industry until about 50 years ago when poured concrete wall construction became more common.

Today, 12 million tons of coal ash or cinder is used as a strengthening agent to make light-weight concrete blocks. Cinder blocks are still used today but are prohibited in some building applications under building codes. The blocks are prone to moisture damage, buckling, bowing, and lack the tensile and shear strength of concrete blocks.

Another drawback to cinder blocks was the toxic nature of the coal ash used in their manufacture. The toxins are linked to nervous disorders, cancer, health complaints, and decreased cognitive ability.

Today, the lighter cinder blocks are used in walls in large construction projects where their weight is a bonus, and they don’t have to carry any load. They are often used in alternating patterns with concrete blocks to reduce weight without weakening the construction. The hollow-core blocks are still used in some foundations and other construction applications, landscaping, gardening, fire pit and place construction, benches, and hundreds of other locations and uses.

Although ash is less commonly used as an aggregate replacement today in blocks, it is used as a mixing agent in most blocks, and to lighten Group 2 concrete blocks. The term ‘cinder block’ has come to mean light-weight low-density blocks, and more confusingly, to be synonymous with any hollow core concrete block. When purchasing lighter cinder blocks today, the seller should be able to tell you if they contain ash or pumice. 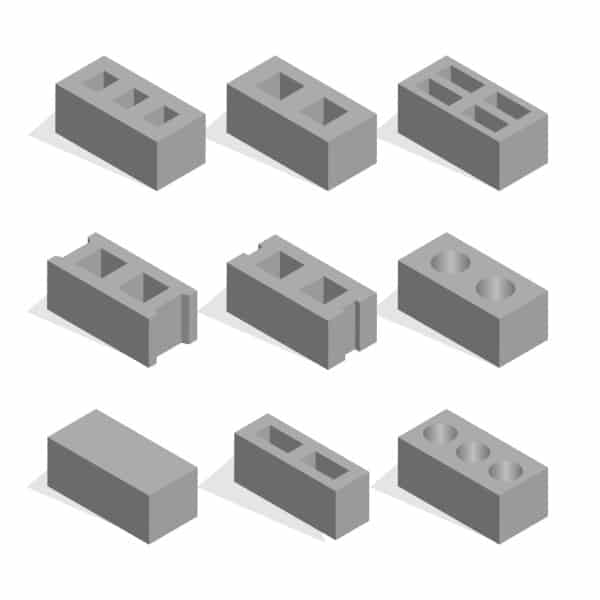 Today, there are at least 32 different shapes and dimensions of cinder block. They are divided into pier, stretcher, sash, hollow return corner, and 45° angle. The dimensions range from 4”x4”x8” to 8”x12”x16”, with angle blocks reaching up to 21” long.

Although cinder blocks have come to mean any hollow-core concrete block, we’re referring to those that are true cinder blocks. Lightweight blocks that use ash or pumice weigh less than standard aggregate blocks of similar size and shape that use gravel or stone as the aggregate.

A light-weight cinder or pumice hollow-core 8’x8’x16 stretcher block weighs approximately 28 pounds. It is about 10-pounds lighter than a standard concrete block of equal dimensions. Cinder blocks of different shapes and sizes will also be lighter than similar concrete blocks.

What Is the Size of a Cinder Block

Cinder blocks come in 4”, 6”, 8” and 12” thicknesses (widths) and 2”, 4” and 8” heights. The 8-inch height matches three rows of standard clay bricks, and the 16-inch length compares to 2 brick lengths. This allows bricks and blocks to be laid in paired courses and line up for window and door openings.

Where to Get Cinder Blocks

Today, most building supply stores carry ‘cinder’ blocks that are actually hollow-core concrete blocks with some ash content. To purchase lightweight blocks containing ash as the aggregate may involve a special order at most stores.

Local concrete block and brick manufacturers are more likely to have some in stock or will run a special order and cut out the middleman. You may also find old cinder blocks at renovation or rebuild stores.

How Much Do Cinder Blocks Cost

Today, old formula cinder blocks are more common near coal-burning plants, those further away have to ship in coal ash or pumice and so use it as a mixing agent instead of an aggregate. If you’re lucky, you may find an internet buy-sell-trade site listing used cinder blocks taken from older building demolition sites for $0.25 to $1 each.

Hollow-core 8”x8”x16” cinder blocks containing 25% to 40% ash will cost between $1.50 and $2.00 US at most building supply stores. Purchasing light-weight blocks of the same size that use ash as an aggregate may cost 5 to 10 times more depending on your location and the number of blocks being ordered.

What Is Concrete Block 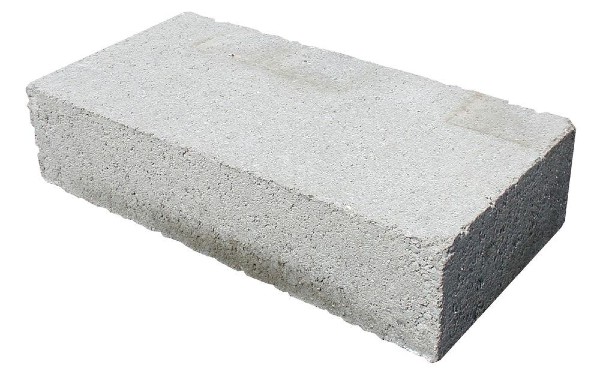 A concrete block, or concrete masonry unit (CMU), commonly refers to an 8”x8”x16” block used in construction. The blocks are stronger, denser, and heavier than cinder blocks.

They are manufactured using a 1:6 ratio of Portland cement to aggregate, with 60% of the aggregate being fine material like sand and the remaining 40% being coarse material like finely crushed stone or gravel. The mix is poured, pressed, or cast into molds and cured.

Portland cement is mixed with water to form a concrete slurry of one to two parts Portland cement with one part water. The mix is thickened to the consistency of tempera paint – thick and pasty – and added to the aggregate. Alternatively, the cement and aggregates are dry mixed, and then water added to form the desired consistency. The mix is then cast into blocks of standard sizes and weights.

Patents for making concrete blocks appeared in the 1830s for blocks being manufactured on building sites. The precast blocks were laid like common clay bricks but could be laid more quickly to form walls. They were cheaper, quicker, and easier to use than quarried stone blocks too. The first house built completely from precast blocks in the US was on Staten Island in 1837.

The Frear Stone Manufacturing Company patented a decorative concrete block that was less expensive and quicker to produce than carved stone blocks. The Chicago Company was the first commercial enterprise for precast concrete blocks. After the 1871 Chicago fire, the blocks became more popular as a fire-resistant building material since those in use survived the flames.

Manufacturing of blocks on a large scale for distribution began in earnest with the use of the cast-iron hollow-core concrete block making machine patented by Harmon Palmer in 1900. By the end of the 1920s, more than 1000 companies and contractors had constructed hundreds of thousands of homes had using precast hollow-core blocks. The Sears Roebuck Company even sold a rock face and smooth finish block making machine for $57.50 that was very popular between 1905 and 1920.

According to the Masonry Standards Joint Committee’s requirements for building codes, the CMU must withstand a minimum of 1,000 psi to 5500 psi of compression. Unreinforced hollow-core blocks have shear strength, average tensile, and flexural tensile strength of approximately 10% of their compressive strength.

Hollow core or cellular blocks have between 50% and 75% of the total mass of a solid core block with similar dimensions, making them lighter than the solid block.

Grade B is lighter weight hollow core blocks with a density between 1100 and 1500 kg/m³, contain between 25% and 40% cinders, have a compressive strength between 3.5 and 5.0 N/mm2 and aren’t rated for load-bearing construction. Grade A is also more fir- resistant than Grade B blocks. Grade C blocks are solid core, have a density greater than 1800 kg/m³, and have a minimum compressive strength between 4 and 5.0 N/mm2.

Hollow square concrete blocks are used to fabricate chimneys or to form walls or garden retaining walls or boxes. Solid squares are commonly used for foundation blocks or retaining walls.

What Is the Size of a Concrete Block

The weight of different concrete blocks depends upon their dimension, density, and group or grade. Larger blocks of similar density will weigh more than smaller dimensions, while light-weight will be lighter than heavy, dense blocks of the same size.

How Much Are Concrete Blocks

Solid cement block prices are slightly more than the lighter hollow-core costs. Both styles of blocks are available at most building supply stores and at local manufacturers. The price will depend on where you reside. Purchasing large volumes of blocks often decreases the cost per unit, but may require delivery.

Comparing cinder blocks and concrete blocks is a good way to determine which type of block is best for your project. Cinder blocks using coal ash as an aggregate are not as widely produced as they were 50 years ago but are still available in some areas.

However, the term ‘cinder block’ has been used to mean lighter weight, hollow core concrete blocks. The ‘lighter’ blocks use sand and tiny gravel aggregate but also contain between 25% and 40% ash.

Making a choice between cinder blocks or concrete blocks is less of an issue today as blocks using ash as the aggregate aren’t very common. The term ‘cinder’, though, is commonly used to identify light-weight low-density Group 2 blocks with 25 to 40% ash content. For structural load bearing concrete blocks, Group 1 or 3 blocks are recommended.

We hope you have a better understanding of how cinder blocks differ from concrete blocks, and of their different uses. If you found the article helpful or interesting, please share it with others. As always, we appreciate your comments and suggestions.