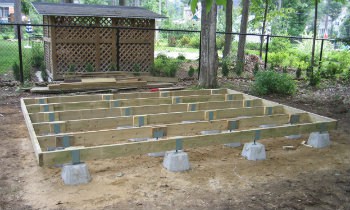 A foundation is the most important aspect of your project since the whole project rests on it (pun intended). There a few different types of foundations, some will be referenced and described. This article will hopefully help educate you and explain how to build a shed foundation with deck blocks.

What are Deck Blocks 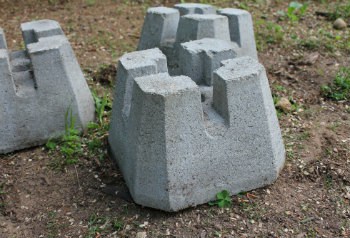 Deck blocks are a preformed mass of concrete with formations in the top sized to hold lumber for vertical posts or beams to support a structure.

They will look similar to below but may vary slightly in size or shape. They may be wider at the base than the top, or they may be square like this.

When Should They be Used?

Deck blocks are generally a more temporary simpler type of foundation for free standing or floating structures and used when below grade(the top of the soil) concrete piers aren’t needed, wanted or an option.

It’s best to check with your local building code office to see if they’re allowed for your type of structure. Some areas may additionally require the use of auger type tie downs that are like a metal screw that goes into the ground then fasten to structural framing members.

There are other types of ground anchors like used for Mobile Homes etc. They will add lateral support and inhibit uplift in stormy or high wind situations.

How much are Deck Blocks and where do I get them? 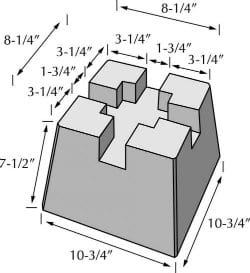 They vary in price from $4 to $6 depending on location. They are found at most big box home stores or check your local hardware store.

How big are deck blocks?

Will Deck Blocks Hold Up to Frostline Restrictions and Will They Sink?

Basically they won’t be allowed. If your area has frost line restrictions which vary up 70” in northern areas, they won’t likely be allowed for permanent or residential structures.

The structure on blocks also can’t be fastened to a permanent structure with frost protection (foundation down to frost line). The blocks float on the ground and will raise and lower with the frost.

That is also a factor for underground mechanicals that raise to the structure. Obviously, you don’t want one section raising and lowering and another not. It would cause structural damage and separations.

The deck blocks can sink if the soil under them erodes for some reason or the weight is unevenly distributed. That’s why it’s a good idea to use more than less.

Dispersing the weight is the idea and diverting water away from the structure. Especially in loose soils or wet conditions which requires more weight distribution.

Deck blocks will normally be quicker and cheaper to install than concrete footings. Blocks will allow minimal surface prep or digging as opposed to concrete piers which will usually require excavation of large amounts of dirt, more labor and associated costs. The blocks can be buried but typically aren’t more than a couple of inches.

Concrete footings will provide greater support due to the higher mass and surface area but will usually require more time and money. Piers will provide a greater lateral (sideways) and overall support than blocks.

How Many Deck Blocks Do I Need?

The quantity will depend on the soil conditions, weight, layout, and the size of your structure. Softer soil or heavier structures will require more weight distribution. Structures like small decks or sitting on a rock will require less.

Generally speaking, you want support every 3-4′ for a normal use building and 4-6′ for lighter situations. An average 12′ x12′ can use around 18 blocks, but more is certainly ok, just space evenly.

There are a few variables for the quantity of blocks so drawing everything out is a good idea or using an online calculator can be useful. There are too many factors to show how to use it, but a little research can aid your plan and give you a nice drawing.

How to Build a Shed Foundation with Deck Blocks

Step #1 Start with a plan and write it down, so steps aren’t missed. 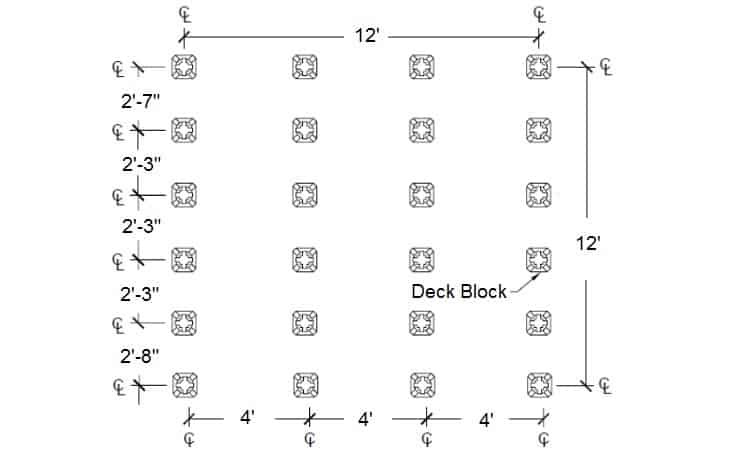 Step #2 Decide if excavation, compaction or placing gravel is needed to reach your overall structure height. Gravel isn’t needed, but some like to use it. Step #3 Different slopes may require other options or placement of your blocks depending on the steepness of the grade(ground). Step #4 Then calculate where your blocks will be located and prepare the area as needed using level string lines, a laser transit or other level method. Step #5 Compaction or hand tamping is always a good idea for any foundation method. 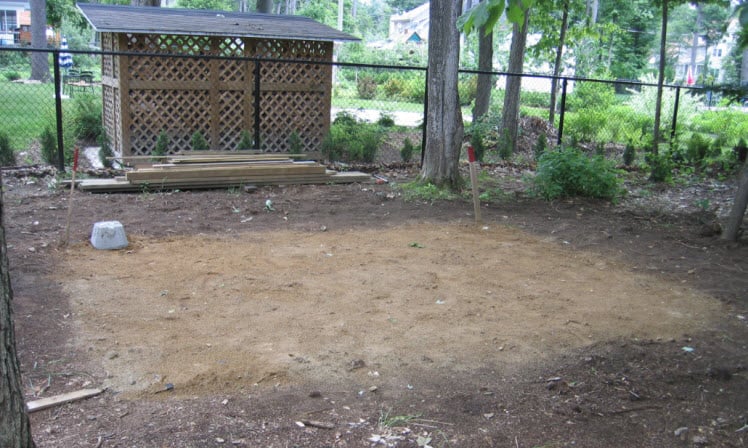 Step #6 After placing blocks continually check your beam, or structure is level with the longest level possible and square it up. Don’t use a 2′ level on 16′ lumber, it will rarely show actual level especially with treated lumber. 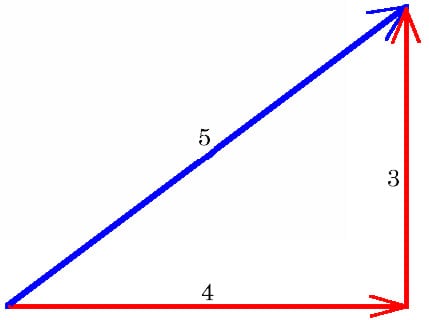 One can measure diagonals or use the 3-4-5 multiples technique. Which means mark from corner to 3′ on one leg, the other side should be 4′.

Measuring between the marks should be 5′ as illustrated. Multiples can be used for larger structures like 6-8-10. Use the largest multiple without extending beyond your structure, for best results.

Deck blocks make a very stable base, but can be difficult to level if the ground settles; especially once the shed is built. The more the ground is disturbed trying to level the deck blocks, the greater the chance they will settle out of level over time. I prefer the advanced method that makes the deck blocks adjustable.

A great way to reduce settling and make a level base is to use adjustable 4×4 steel deck supports (check current price on Amazon) with the deck blocks. The steel supports fit into the center hole in the blocks and are easy to adjust to make a level base for your shed, with minimal ground disturbance. Use concrete mix to fix the adjustable 4×4 supports into the hole in each deck block.

The following is a step by step on how to make adjustable deck blocks.

Picture 2: Use dish soap to remove any oil or grease from the steel supports.

Picture 3: Separate the bracket and bolt from the base sleeve.

Picture 4: Dry fit the base cylinder into the hole in the deck block so the corners are supported by the block; this is how it will sit in the concrete.

Picture 5: The supports are more secure with the cylinder fully embedded in the concrete.

Picture 6: Tape the top of the cylinder closed to keep the concrete out.

Picture 7 & 8: To make a better bond between the concrete and the block, wet the block. Use a trowel to fill the hole and slots in the deck block with concrete. Push the 4×4 support cylinder, tape end first, into the concrete in the center of the deck block.

Picture 9: Angle the steel base plate so it rests on the deck block, similar to Picture 4. Smooth the concrete and remove any mess. Let the concrete harden and dry.

I recommend placing the blocks together and doing the same step to each.

Once the concrete is cured, align the deck blocks according to your foundation plan and level each one. They do not have to be level with each other. Insert the bolt end of the bracket and place the beam into the brackets. To level the beam, tighten or loosen the nut. You now have adjustable deck blocks.

Now you are ready to build your shed.

Here’s a video about how to build shed base using concrete deck blocks (traditional way):

Where I live, we have a lot of snow and during the winter, temperatures sometimes drop below -22F(-30C).
Here’s the video that shows how the foundation looks after 2 years of harsh weather.

Deck blocks can be a very quick easy way to build a foundation. You will have to decide if they will work for your situation and your local building regulations.

If you need something quick and easy, they will likely work. If it’s any kind of building, I strongly recommended to anchor it down in some way to combat the high winds.

If you’re building something to last a while, I suggest considering a concrete pier as they get the mass and stability of being in the ground. Digging a hole setting a cardboard sonotube in it at the correct height is pretty quick and easy. It will require mixing and pouring the concrete, but in the long run, it’s usually the preferred method.

Especially if the frost line is involved which it is for most of the US and likely all of Canada. Check with your local building permit office, even if it’s just to check what’s required for your general area. Even if it’s not required it’s a good practice to follow it.

Shawn Winrich is a regular guy with a normal childhood who started fixing and working on electrical, mechanical and construction projects at a young age learning hands on. After years of working with all the construction trades he has began sharing his knowledge with those willing to learn.