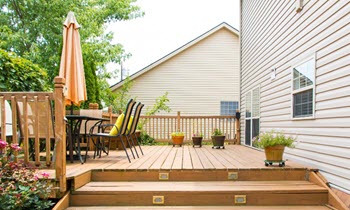 As I watched the rain come down on my newly built deck a few years ago, I began to wonder about all that water pooling on my brand new deck boards. While my deck was perfectly level, I was considering if a deck should have a slope. A slight slope might allow water to gradually run off the boards instead of evaporating or absorb into the wood.

Deck boards should have a slope of about 1/8” per foot. This allows water to easily slide off deck boards more efficiently during rainstorms. It is also a small enough measurement that it won’t be visible nor will you notice it when standing or walking on the deck.

In this article, we’ll take a look at reasons you might want to slope your deck and other instances where sloping your deck might not be necessary. As well, we’ll talk about how to slope different types of decking material and considering your climate when planning your deck slope. 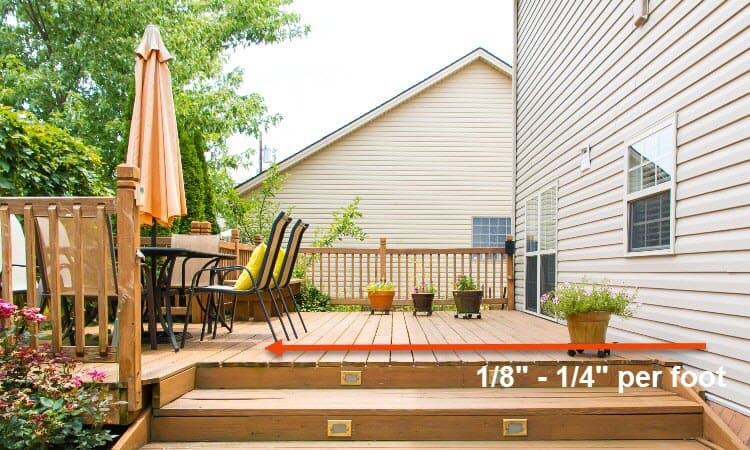 Should A Deck Have A Slope?

In most cases, yes, a deck should have a slope. For decks built against a home or another structure, a slight slope away from the house or other structure is advisable for the simple reason of keeping water away from your house.

If you have a freestanding deck, such as a low platform in the middle of your yard away from any structure, then a slope is not necessary since the direction of water egress doesn’t matter.

For decks with deck boards – the predominant type of decking material – the gaps do provide adequate drainage. In most cases, a level deck with proper gaps should suffice. However, if your deck boards run perpendicular to your home, then you’ll need them sloped away from your home.

Even deck boards that run parallel to your home should be sloped slightly away from your home. While a deck board is usually only about 6” wide, encouraging water to run off the far side of the board as opposed to the side nearest the home will result in pooling further away from your house. And in a huge rainstorm, every inch counts when it comes to water and your foundation.

How Level Should a Deck Be?

An eighth of an inch might not seem like a significant drop, however, but over 10’ it adds up to over an inch. This is especially important if your deck boards run perpendicular to your house, which can channel water right into your ledger board if the level is even slightly out of level.

Some might say that sloping your deck still won’t prevent water from pooling on deck boards because boards will inevitably cup and hold water regardless of slope. However, proper installation of deck boards – ensuring the best face is facing upwards – will negate any significant cupping and allow the slight slope of the deck to shed water.

There is significant debate about which way to install deck boards to avoid cupping and, thus, retain water on top of deck boards. This would also render deck slope ineffective. However, since so many variables affect deck cupping direction, it is simply advisable to install deck boards best face up. This gives you the best odds at having deck boards that remain level or cup downwards, allowing you to slope your deck.

If you have composite decking, which will not cup or one way or another, then a ⅛” slope is ideal and more than enough to shed water. While you could keep a composite deck level, some water would stay and eventually evaporate. Either way, a composite deck requires little or no slope.

If your deck is not attached to or next to any structure, then sloping your deck still might be advisable if only to shed water off the deck boards more efficiently.

How Much Should a Deck Slope Away from the House?

A deck should slope ⅛” per foot perpendicular from a house. Regardless of deck orientation – which direction the deck boards run – a minimum slope of ⅛” is optimal for shedding water. If your deck surface is solid, then ¼” per foot is a better choice.

Deck boards that run perpendicular to a house will have the width of each board abutting the house. This is dangerous because if you keep your deck level, you run the risk of water channeling down the width of the board into your house.

If your deck gets even slightly out of level and rises on the end away from the house, then you could face moisture damage around the ledger area of the deck.

To avoid this issue, consider sloping your deck ¼” each foot. Even with a deck 12’ in length, this is still a relatively unnoticeable drop and will ensure that your deck always slopes away from the structure even after any frost heave or deck movement from foundation settling.

Remember that the ⅛” suggested slope is more of a recommendation than a rule, and you should use judgment when considering the climate where you live. Do you live in an area with lots of rain or heavy rainstorms? If so, think about sloping slightly more than ⅛”.

Measurements of ⅛” to ¼” per foot are not noticeable to someone standing on your deck. Visually it would not be possible to notice any discernable difference unless your deck was spanning a long distance – say over 20’.

There is no code stating that decks should be sloped. There are several reasons for this. The first and most important is that you must ensure that your deck is built to code.

Following building code in your area is critical because code considers moisture and water damage. For instance, when you build a deck attached to your house, there are very specific rules for a ledger board and how it should be flashed properly. Proper flashing and ledger attachment will ensure your house remains water-free, even with a level or slightly out of the level deck.

Also, decks attached to homes built to code should be beneath any entry point to your home, so that excess water will not flow under door or window openings. If your deck is level with an opening, then you immediately should know it wasn’t built to code. In that case, sloping your deck away from your home would be highly advisable.

If your deck is built to code, then why slope it away from the house? First, you may have a deck that was built before you moved into the home. If so, then you don’t know if the builder – or previous homeowner – followed the building code.

Secondly, sloping your deck will help keep water off the deck boards, which is a good idea regardless of how well or poorly built your deck was constructed.

How Do You Fix an Unlevel Deck?

There are several ways to fix an unlevel deck – let’s take a look below at the various options you can use to level your deck.

Removing your deck boards and applying cedar or plastic shims beneath the boards is one way to fix an unlevel deck. However, this can be a potentially finicky and tedious process because you may have to level many boards to accomplish a level deck.

You may also have to shim each board at each joist, too. Why? If you only shim deck boards at one end, the middle of the boards will not directly make contact with the joists. When that happens, you get deck board movement and you can compromise the integrity of the deck board.

An easier method if you want to remove deck boards to level a deck is to use an electric planer to plane the joists to level. Once the deck boards are off, it is straightforward to run the planer down the length of a joist.

A laser level and/or chalk line is critical when using an electric planer to level joists. You’ll need to make sure each joist is at the proper level before you plane.

Level From Beneath the Deck

A simpler way to level a deck is to get at it from underneath. You can use a floor jack and a piece of scrap 4×4 to lift a deck. Remove the beam joist connections, and place the jack beneath a joist on the end that needs raising.

How to Fix Unlevel Deck Boards

Sometimes boards cup or warp, even when screwed into joists. To prevent this, be sure you’ve used appropriate fasteners and fastener pattern. For instance, each board should have two screws per joist, an inch from the edge of either side of the board. The best face of the board should face up regardless of the bark side.

If all the deck boards are unlevel and slope in one direction, see the above process for leveling them all at once, which requires removing them, shimming, then re-installing. If only a few are out of level, consider flipping them or simply buying new boards that are straighter.

Slope Beneath a Deck

The slope beneath your deck is arguably more important, particularly because this slope is where the water actually accumulates. Obviously, it should slope away from your home.

Over time, pooling can occur in the earth beneath your deck. Why? The areas beneath a deck in which water falls cause depressions. These depressions can get quite deep, depending on your soil type, and sit for long periods of time. Over time that water can seep back into your house.

This is why sloping your deck is important. You want your deck to shed water away from your house, and even if that means water falls through the gaps on the opposite width of the board- only 5 ½” further – it still makes a difference.

Ensuring a gradual slope from your house to beyond your deck will mitigate any water damage that might occur to your home beneath your deck.

Also, remember that frost heaves in cold climates can make slope change. Ensure the crown – which is the part of the earth closest to the house – is high enough to mitigate spring runoff issues.

If you have clay-rich soil, your heaving is likely to be more extreme. Ensure the entire length of the slope beneath your deck runs away from your home, as spring runoff will need an outlet since the ground is still frozen. Also, for better drainage add gravel under your deck.

Remember that there are numerous instances when sloping your deck might not be necessary. The type of decking material you use, the gapping between deck boards, and the direction the boards run all are factors in determining deck slope.

If you aren’t sure, know that a ⅛” slope per foot will not hurt the aesthetics or walkability of your deck. Play it safe and give your deck a slope, and you won’t have to worry about pooling water. If you still choose to make your deck completely level, ensure you follow the building code to mitigate any issues with deck water and your home.

Thanks for taking some time to peruse this article. I hope you found it informative and can apply some of these ideas or suggestions to your deck. As always, don’t be afraid to drop me a line or comment on this article to let me know how it can be improved!