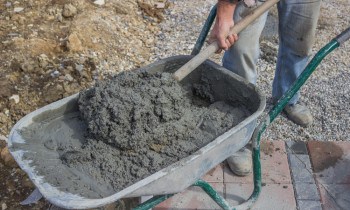 I remember a long time ago when I was asked to help some relatives pour concrete footings for a workshop on a family farm. I’d never really considered how concrete worked or what was in it. At that point, I wasn’t sure if the concrete was a homogeneous or heterogeneous mixture.

Concrete is a heterogeneous mixture. It is composed of cement, water, and aggregate that can be crushed stone, sand, and/or gravel. Concrete is made up of different compounds such as solids – aggregate – and liquid – water. This mixture of various materials makes it heterogeneous.

One of the most important things to remember about concrete is that it is not the same as cement. Cement is just one ingredient that makes up concrete. Cement is homogeneous since it is simply a variety of calcium compounds in a single mixture. When mixed with water and solid substances, it becomes concrete.

Below we’ll investigate the complexities of concrete, what’s in it, and all the different varieties available. We’ll also take a look at what each kind is used for and common misconceptions.

If you remember back to your high school chemistry class, then you’ll know that a mixture is just two – or more – substances that are mixed physically. The term “physically” means that you put two different substances together, whether putting salt in a cup of water or blowing bubbles underwater.

In terms of construction, mixtures are seen in many different areas, such as in concrete and metal products.

Concrete blocks and poured concrete are some of the most common mixtures found in construction applications. Most homes are on a concrete foundation of some kind, and that substance is a mixture.

Steel is also used either in the construction itself or used to construct a building. Steel alloys are found in most tools and machines, at least in part, if not whole, and use different elements along with carbon to make mixtures that give tools or steel supports qualities to perform their function better and become more durable.

When finishing a home, consider your paint and drywall compound as mixtures, too. Paint is a mixture of pigments and binders which combine to make a variable gloss in a certain color. Drywall compound mixes lime with small amounts of talc and other ingredients to make a coarse paste that seals wall joints.

Is Concrete a Mixture?

Yes, concrete is a mixture. But what kind of mixture is concrete? Concrete is a heterogeneous mixture because the substances that make up the concrete are not always perfectly and evenly distributed throughout the mixture.

If you mix concrete, chances are you’ve mixed it enough for it to get hard and perform its function. Therefore, despite it not being a perfectly uniform mixture, it still mixes, gets hard, and forms a reliable, construction-worthy material.

Concrete is not a solution, and it still isn’t perfectly distributed all the time. A solution refers to a certain kind of homogeneous mixture in which one substance is dissolved in another. While concrete is a mixture, none of the ingredients are dissolved with another.

On the other hand, a substance like air is always perfectly homogeneous – you don’t have areas of the world where the percentage of oxygen compared to nitrogen or hydrogen changes. Even at elevation, the air is still the same – it is simply less dense. So the chemical makeup always stays equal.

Cement comprises 10 to 20 percent of concrete and is made of limestone combined with silica sand, aluminum, clay, or another type of fine aggregate that reacts with the limestone or calcium to form a sort of paste – called a binder.

Aggregate in concrete varies. It is often gravel and is between ⅜” and 1 ½” in diameter. It can also be slag, crushed stone, pieces of old concrete, or any other type of clean, oil-free natural material of the same dimensions.

Let’s take a closer look at all the different types of concrete mixtures out there available on the market for all types of applications. There are many different types depending on what, where, and even when you intend to mix it and use it.

Concrete mixtures vary based on the type of aggregate used, while the water and cement percentages only change slightly. Even small changes in percentages of water, cement, or aggregate can create stronger (or weaker) mixes, result in faster (or slower) drying times, and be more or less dense.

Normal concrete is a mixture of crushed stone, portland cement, and water. It takes about 90 minutes to set but about 90 days to harden to around 95% of its full strength.

Regular strength concrete is not for use in areas with lots of freeze and thaw cycles, as it has low tensile strength, which means it is susceptible to external movement. The ratio of water to cement in this mixture allows for up to 2% of the density to be air. This results in a product that is very easy to work with but not as strong as other concrete mixtures.

First, this mixture reduces the water content in relationship to the cement. This creates a much greater strength – in excess of 6,000 p.s.i. The mixture also includes silica, which reacts with the cement to increase adhesion, resulting in more “paste” which adds to the strength.

Lastly, plasticizers are included in this mixture to improve the workability of the concrete, as it is very viscous and difficult to use in high-density rebar applications.

Since this concrete is much stronger due to the alteration of the mixture ratios, it can be used in structural applications in large commercial and industrial sectors. Where space is restricted, a smaller volume of high strength concrete can still be utilized due to its strength.

This concrete mixture is used in places where there are significant freeze/thaw cycles. One of the problems with concrete is that when exposed to freezing temperatures, water molecules within the concrete freeze and expand. When the expansion occurs, it can cause structural damage to the concrete via cracks in the material leading to structural failure.

This type of concrete is ideal for cold areas since the mixture allows the material to freeze without damage. However, the density of the concrete is reduced, resulting in a lower total p.s.i.

This type of concrete uses a mixture with aggregates that are lighter in weight, making it ideal for applications that do not require the mixture to be primary support, such as a tertiary wall on a structure or a sidewalk.

Lightweight concrete makes use of shale, clay, ash, or pumice as the primary aggregate. These are lightweight materials that make the mixture extremely workable and easy to use. It is often used in concrete blocks – cinder blocks – to make them strong yet easy to handle.

This mixture is often treated with air entreating agents to withstand freezing and thawing since they are used in concrete blocks that are the predominant home foundation material.

This type of concrete utilizes what is called “superplasticizers”, which make the mixture less viscous and easier to work with. There are also water reducers in the mixture, which use chemical reactions to reduce water content, which creates a higher strength product.

This mixture differs from high strength concrete in that it uses fly ash in place of 25% of the cement. It reduces the creation of calcium compounds, which can weaken concrete, and thus improves the overall durability of the mixture.

There is some confusion over the words ‘homogeneous’ and ‘heterogeneous’. The differences between the two words, when it comes to practical, real-world applications, are quite similar but with a few key differences.

What is a Homogeneous Mixture?

Homogenous means that all parts in a mixture are the same and that throughout the solid, liquid, or gas, the mixture is completely uniform.

An example of a homogenous mixture would be air. The air we breath is completely uniform no matter where we are, whether in our house or outside. While there might be pollution or particulate that would infiltrate the air, the composition of the air itself remains perfectly uniform. Pollution does not become part of the air.

Another example would be ocean water. Even if the salinity changes in seawater, it does so at a uniform rate. You cannot swim at the beach and experience patches of higher or lower salinity.

What is a Heterogeneous Mixture?

Heterogenous means something that consists of different parts. That can apply to anything from a group of people to a liquid or a solid.

Another example could be, say, a blueberry muffin – or any processed food item. While the distribution of the ingredients should be relatively uniform, you can never have each grain of salt, baking soda, flour, etc., evenly distributed. No two muffins are identical, and thus the mixture is heterogeneous.

The differences between these two types of mixtures can be a bit difficult to distinguish. Let’s start by outlining some of the similarities:

The differences between homogeneous and heterogeneous mixtures are many, but the most important include:

Is Concrete a Homogeneous Or Heterogeneous Mixture?

Concrete is a heterogeneous mixture. First, simply by looking at many types of concrete, you can tell that it is made up of different substances such as gravel or crushed rock. Particles are not totally uniformly distributed in concrete mixtures. And, you could feasibly separate the concrete into its base components of cement, water, and aggregate physically.

Within the concrete, there is cement, aggregate, and water. Cement is simply a glue that holds the rock or other aggregate together. Water activates the cement. Even cement itself isn’t a homogenous mixture, which means concrete could never be homogenous.

Understanding that concrete is a heterogeneous mixture is important since the choice of concrete type for your purposes is an extremely important decision. The ability of a concrete mixture to be changed due to it being heterogeneous can allow you to choose a concrete mix that is suited to your construction parameters.

When working with concrete mixtures, make sure you are extremely careful when following the directions for use, as improper use of concrete mix can cause structural failure. Also, use proper PPE, as concrete mixtures can contain irritants.

Thanks for taking the time to read this article. If you have any experience working with concrete and have any ideas or feedback to share, then please drop me a line. I’d love to know how we can improve this article.