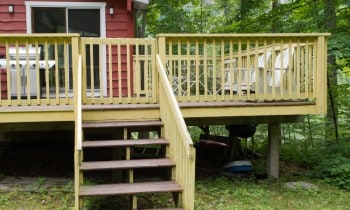 The other day I was at my neighbor’s house for a party, except that he’d roped off his deck and no one could use it. He said that it was sagging and wobbling because a deck post was rotting and didn’t want the deck to collapse. We spent the rest of the party discussing the best way to repair or replace the rotted deck post.

The best way to repair rotted deck post is to replace it. If the post has been sunk into the ground and backfilled, you’ll need to excavate the entire post, remove it, and install concrete in a sonotube to above grade. You can then mount a new deck post and post bracket on top of the new concrete support.

Replacing a deck post can be extremely difficult in many circumstances due to low deck clearance or placement of the post. There are tons of variables involved in a job like this, and below we’ll go over all the different variations of post removal and repair you might encounter on a deck. 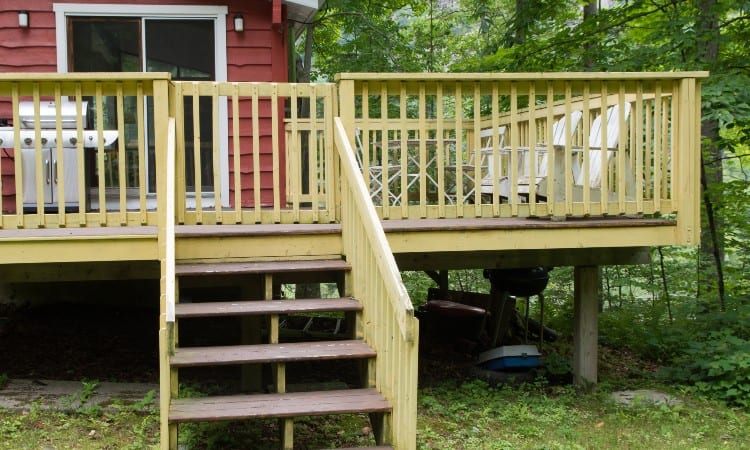 Not only can a rotted wood deck post be repaired, it absolutely should be repaired. A deck post is one of the most important pieces of a deck’s infrastructure – if not the most important. Each post supports a particular load area of the deck – if one fails, that load is transferred to other posts, which may or may not be designed to hold that extra load. When this occurs, decks can collapse and cause injury or worse.

When would you repair a deck post instead of replacing it? If you have decorative – as well as structural – deck posts, then repairing is desirable. Many older homes support a second-story deck over a porch or concrete patio with decorative posts. If a post’s failure occurs, you will have a near-impossible time trying to match the old post with something new. You could pay a fortune to commission a new one or repair the old post.

Repairing a post is safe if done properly. There are several different methods, from cutting away the rot and laminating a new piece to fit in the old post to using several metal brackets available to shore up weak points in the post.

A repaired post should withstand the same vertical loads that it was previously able to withstand. Of course, that comes with caveats; if the deck post is rotted in multiple areas, or has been damaged beyond just an area of rot, then you should seriously consider replacing the post altogether.

If you have a post you absolutely want to save but aren’t sure if it can be salvaged, then your best bet is to ask a carpenter, to be sure. When dealing with extremely heavy loads and the safety of people on a structure, an educated opinion is an idea I highly recommend.

When Should I Replace Rotted Wood Deck Posts?

You should only even consider repairing a wood deck post if you, for certain, know where the rot or damage is on the post. If you aren’t sure, then you must replace the post.

Rot is insidious. Wood rot is water infiltration. Depending on where your post is, there could also be particulates in the ground that could hasten the development of rot in our deck post. If you have a wood deck post that is sunk below grade, poorly draining soil such as clay will trap water between the post and soil, which will eventually spell rot – and lots of it.

Even a wood deck post on a concrete footing can rot if it is close enough to the ground. And it may spread to parts of the post you cannot see, which means you are unaware of the full extent to which the post is damaged.

Once water enters a post, it sits there and breaks the wood down from within, creating air pockets for more water to enter, and so on. So unless there is only one clearly defined area of rot, then you should replace the post.

Deck posts buried in concrete are especially susceptible to rot, and it isn’t a good idea to repair these as you’ll never be able to get the entire post removed from the concrete. The concrete itself is full of moisture – placing wood, treated or not, within the concrete will result in premature rot.

Putting concrete over the wood to raise the deck post footing above grade isn’t recommended as the wood within the concrete can break down and cause weaknesses in the footing itself. You’ll have to remove the entire footing and start over.

Lastly, replacing a deck post is the most common option when having to fix a deck post. Why? Because nearly all of them are 4×4 or 6×6 stock, treated lumber from a big box home reno store. Replacing one of these posts makes the cost of replacement very low.

There are a few general methods for replacing a rotten deck post. A deck post placed on a deck block or raised deck support bracket is less likely to rot and easier to replace. The methods below deal with more common examples of when a deck post will rot.

There are numerous instances where a deck post is supported by a concrete pad of some sort below grade and then backfilled. In more unfortunate instances, the post was sunk into the ground with no additional support. Needless to say, that post would have to be fully replaced with proper support, so we won’t touch on that.

Let’s take a look at an instance of a buried post on a concrete pad. How do you go about replacing that type of deck post?

If your wood deck post was sunk into a concrete footer so that a portion of the post is actually inside the concrete footing, then you’ll need to pull the entire piece of concrete out and start over in the manner mentioned above.

How do you remove an entire concrete footing? There are a few methods. The first and least desirable is to dig. Digging isn’t pleasant, especially if your deck is shallow and you have to work bent over or between joists after deck boards have been removed.

The other method is to use a lever. Here’s how:

Attach it 4” to 8” from the bottom of the post, in an area with no rot. Use a couple of lag bolts – you’ll need at least two.

If this method doesn’t work, and you are unable to dig, then you could concrete over the old footing with the wood embedded in the concrete. This isn’t recommended, as the wood within the concrete could affect the strength of the overall footing.

It is more unlikely that you’ll repair a deck post, as it is generally easier and faster to replace a post than repair. In some instances, however, you may have a decorative post supporting a roof over the deck or a deck above a concrete patio. In this instance, it may be hard to find a replacement post, thereby forcing you to repair and not replace.

If you still want to repair your deck post, then here’s one way it can be done:

Unscrew the post at the top or use a saw. Be careful not to damage the joist above the post.

How Much Does It Cost to Fix Rotted Wood?

The cost of fixing a rotted deck post is only as much as the materials would cost for a new deck post and foundation on a new build.

If you are replacing, then in all likelihood, you will need a treated 6×6 or 4×4 wood post. Some big box stores will sell lengths as short as 6’, which minimizes cost and helps you avoid paying for a length of wood that is way more than you’ll need.

If you choose to repair your deck post, the only extra would be marine epoxy, which is not expensive. You will need tools to laminate a post, such as clamps, belt sander, and a circular saw/multi-tool. Many of us already have some or all of these tools or know a friend who does. Regardless, the cost is low.

The only huge expense is time. If you have to excavate concrete footings to make a new footing, this will take time and effort. Exhaust all other options before you are forced to dig a large hole beneath an existing deck.

While this article is about both replacing and repairing rotted deck posts, understand that repairing is by far the most common solution to this issue. If you have stock deck posts that aren’t the main component of your deck aesthetic, then by all means, consider replacing your deck posts before attempting a repair.

Remember that the repair or replacement of a post is not without its dangers. Any time you are dealing with loads in the thousands of pounds, you’ve got to use caution. Make sure your jack is strong enough and you use solid, 2×6, or greater supports.

Thanks so much for taking the time to read this article. I hope you found some helpful tips for replacing or removing a rotten deck post. If you’ve read this article and thought of something else that could make it better, please drop me a line.