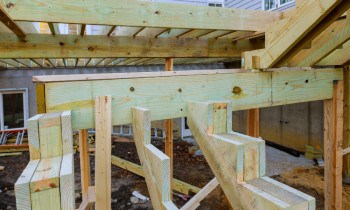 When I built my deck, I wanted my stairs to be extra strong because I knew they’d be getting tons of use. But when I thought about how to attach stair stringers to a deck, it seemed like simply nailing them to a joist wouldn’t be strong enough.

Failure to properly attach a stair stringer can result in serious injury to one or more people, so getting the right fastener is critical to your new deck construction. Simply “winging it” with fasteners you have on hand is not good enough.

In this article, we’ll go over everything you need to know about how to fasten stair stringers to a deck, including tips and tricks that will help you complete the job right every time. 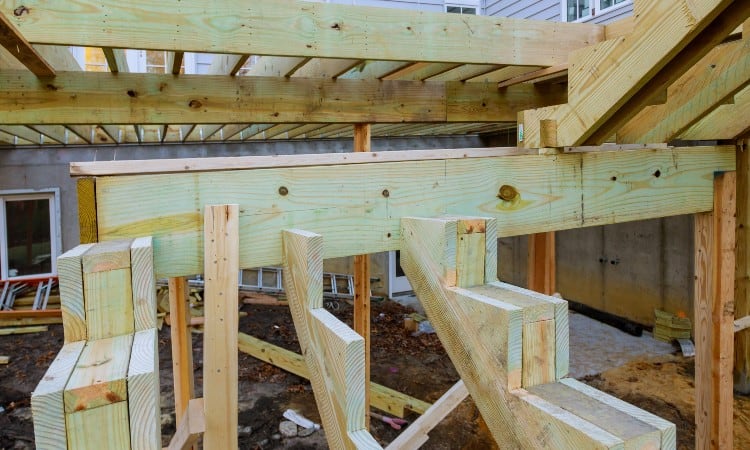 How To Attach Stair Stringers to a Deck

The simplest way to attach stair stringers to a deck is to attach them directly to the rim joist of the deck using hangers or lag bolts. There are several different types of hangers available, so we’ll go over installation procedures for each type. 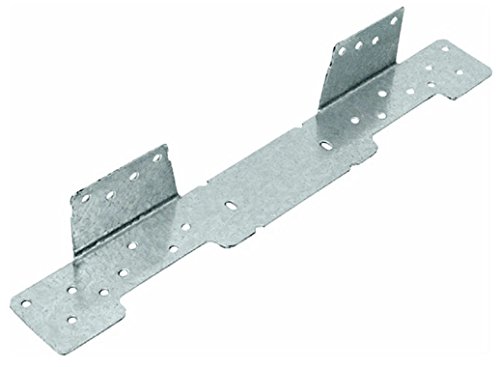 Simpson makes fasteners for pretty much any type of connection used in standard residential or commercial construction, and they have several for stair stringer to joist connections. 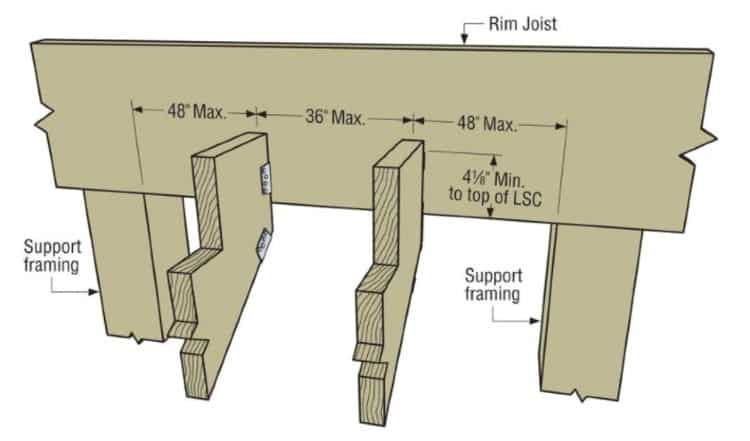 As with any adjustable hanger, they can fit either left or right-hand applications, so you can hide them on either side of the stringer. These hangers fasten using 1.5” 10d nails or 1.5” #9 SD Simpson structural screws. Only one nail goes into the narrow end of the hanger, where pull-out is most likely. 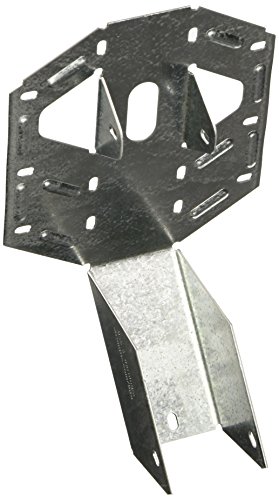 Standard stair stringer hangers that are pre-bent are still one of the most frequent ways to connect deck stair stringers to the deck itself. These don’t vary much from the Simpson adjustable hangers, only that they are already bent to accept the common angle of stair stringers.

Fastening these hangers involves putting 1.5” 10d screws through each round hole. Some types of these hangers will have square holes – these holes allow for the temporary placement of screws to make for easier installation. They can be removed after nails are installed.

If your top tread acts as the first step, then you’ll need a dropped rim joist. That means a rim joist beneath the actual rim joist. We’ll go over that installation procedure more in-depth below.

If the top tread is flush to the rest of the deck surface, these hangers simply fasten to the face of the rim joist with nails. A doubled rim joist is sometimes recommended by some inspectors, but not necessarily according to building code, as the manufacturer only specifies 1.5” nails to fasten their hangers. 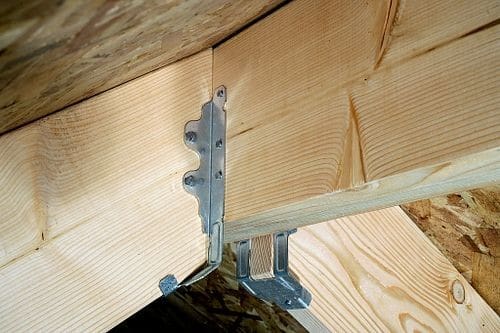 Simpson offers an rafter hanger with adjustable slope that can work with stair stringers, provided the hanger is either galvanized or stainless steel.

These hangers are slightly different from stringer hangers in that most of the connections are through the rim joist. This offers a slightly different install, which may be beneficial if you have issues hammering nails into the sides of your stringers. 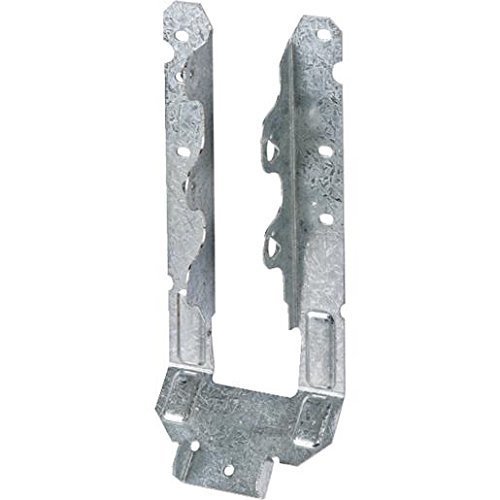 These rafter hangers use longer nails – 3 and 3.5” nails. The longer nails are toe-nailed through angled holes in the hanger, fastening the stringer to the rim joist.

Since longer nails are required, you must have a doubled rim joist. That means you need a joist immediately behind your rim joist, bolted into the rim joist, or fastened like the other deck joists. 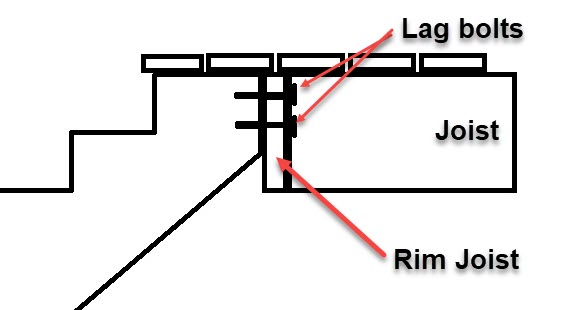 If you don’t want to use hangers of any kind, then you can simply attach the stringers to your rim joist with ½” diameter lag bolts. You’ll want to get at least 2” into the stringer end, so you’ll need 4” lag bolts.

When installing lag bolts as your primary means of stringer fastening, you’ll need a minimum of two. But you’ll also need washers to fit the ½” lag bolts to prevent damaging the rim joist. Pre-drilling the holes is recommended as well, as you risk cracking and twisting the stringer as you screw the lag bolts in.

This fastening method is best when you want the stringers to extend the deck surface, using the top tread of the stringer as a deck extension, making the second-stringer tread the first step. 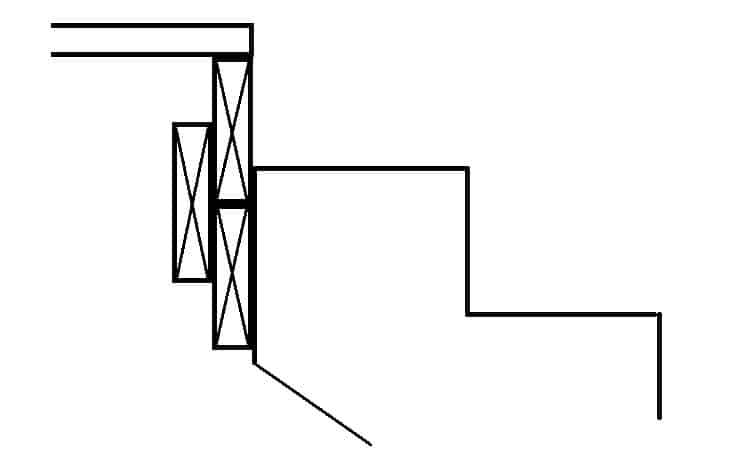 If you want to make the top tread of your stair stringer act as the first step down, then you’ll be fastening your joist hangers low on your rim joist. You’ll probably be installing them too low, further than code will allow. Code allows for a minimum of 60% contact on the rim joist.

To drop a rim joist, you’ll simply be adding another joist of the same size beneath the rim joist. Attaching the drop joist requires the use of backer boards. Use material 2x material the same size as your joist. Cut two pieces to fit the width of the rim joist and drop rim joist. If you have 2×8 joists, then this will be just under 15”.

You should also consider adding blocking between your rim joist and the next adjacent joist. This will reinforce the stair stringer to rim joist connection and distribute the stair weight more evenly onto the deck framing.

When installing blocking, use the same size lumber as your existing joists. Cut them to fit the space perpendicularly between the rim joist and the next interior joist. Use joist hangers to fasten the blocking.

3. Ledger Board on Posts 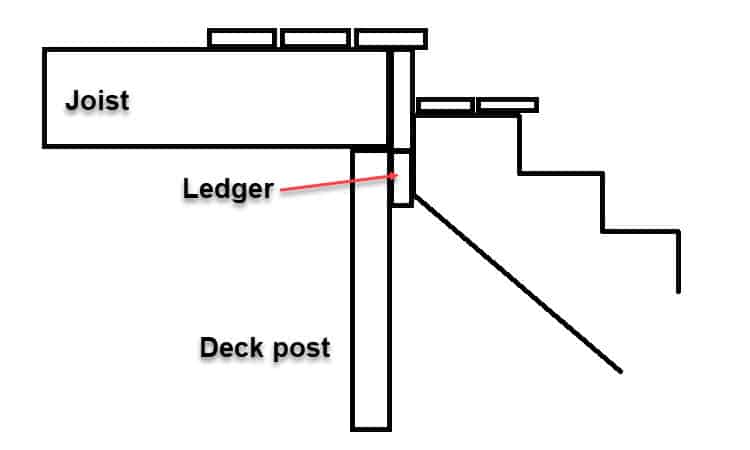 If you do not want to hang your drop joist from the rim joist, then you can create a ledger board for the stair stringers using posts. You’ll have two posts on either side of the stairs. They can run either up under the deck, immediately behind the rim joist, or directly in front of the rim joist.

The purpose of the posts is to allow you to fasten a ledger board of the same size as the rim joist directly beneath the rim joist. This allows you to fasten your stair stringers lower so that the top tread of the stairs is the first actual step and not flush with the deck surface.

Another option involves running the stair stringer up and under the rim joist so that the rim joist acts as the first riser for the stairs and the top tread is flush underneath the deck surface.

The best time to use this fastening method is when your deck joists are parallel to the direction of your stair stringers. This will allow you to affix the tops of the stringers flush up against interior joists. You can then use 3” lag bolts of ½” diameter or 4” carriage bolts. Use three per stair stringer.

This method of stair stringer fastening can also be accomplished when deck joists are perpendicular to the stair stringers, but more work is required to prep the deck framing. You’ll need to install blocking between the rim joist and adjacent deck joist. The blocking will be the same size as the joists and connect to the joists with hangers. 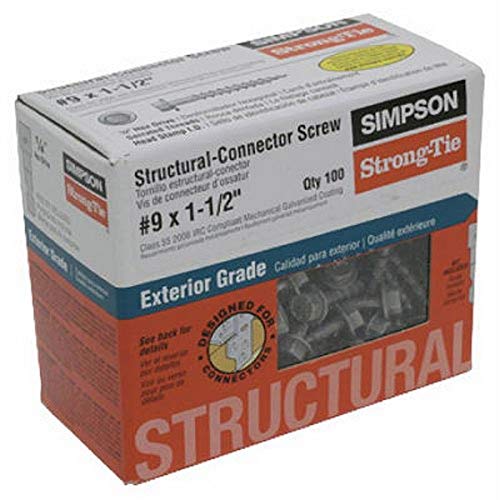 You cannot use non-structural screws. That includes deck screws, building screws, or any other type of screw that isn’t specifically made for installing in a stair stringer bracket. You must also use at least 1.5” nails. That will ensure they go all the way through the stringer.

Keep in mind that a 10d nail typically refers to a 3” nail. However, Simpson sells their own nails that are 1.5” but of the same diameter as a 3” nail.

Finally, use ½” diameter galvanized or stainless lag bolts to fasten stair stringers directly to a deck’s rim joist. Use washers of the same type. Carriage bolts can be used if fastening stringers to the joists beneath the deck or to posts that sit flush against the outsides of each end stair stringer. 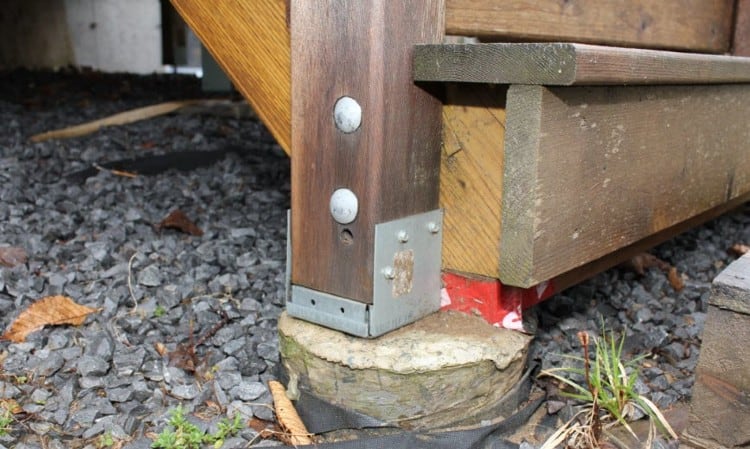 When fastening deck stairs to a landing, you’ll need a concrete pad or another solid surface. You cannot have loose dirt or soil, according to code. The surface must be as wide as the stairs, at least, and at least 3’ deep.

Notch the bottom of your stair stringers on the ends facing the stair and run a 2×4 flat beneath each stringer. This provides a base plate for the stringers to rest against. Bolt the 2×4 to the concrete surface, and you will prevent the stair from ever sliding forward.

If you have posts supporting the bottom of your stairs, then they should be on concrete footings. You can then run carriage bolts or lag bolts through the posts and stair stringer. Two would be sufficient on each side. Ensure that lag bolts are 5” long and carriage bolts are 6”.

There are several ways to make installing your deck stair stringers easier, safer, and better looking. Here are some ideas to take into consideration the next time you have to install deck stairs.