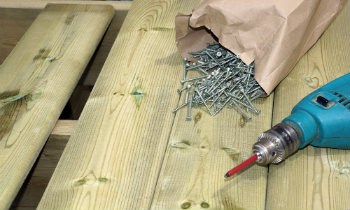 So, you’ve taken on the ambitious project of building a deck. You’ve completed the framing and have finally reached the fun part–laying the deck boards. You want the decking to have enough screws to be secure and safe, but you don’t want your beautiful deck to be riddled with screw heads either. So, how many screws should you put per deck board?

In this article, we will explore how to properly use screws to attach deck boards to a deck and the many options to consider when selecting deck screws. 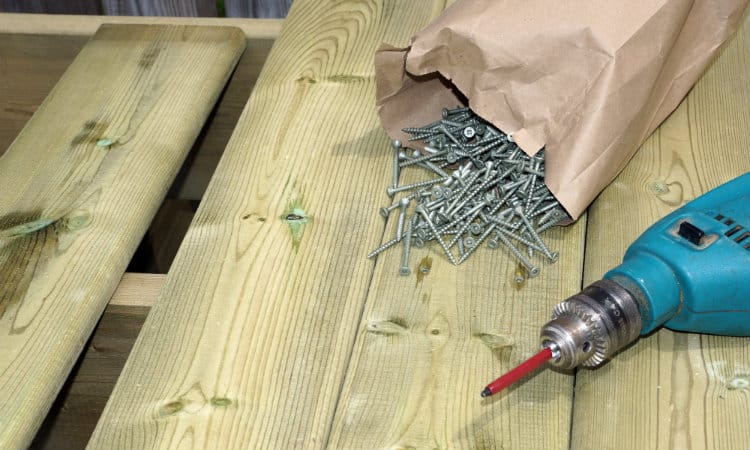 How Many Screws per Deck Board

Deck boards are exposed to all kinds of extreme weather conditions that make the boards prone to warping, cupping, and crowning. The deck’s screws are the only things standing in the way of the elements wreaking havoc on your deck, so you need to use the right amount.

You should use two screws at each point that the deck board crosses a joist to hold the boards firmly in place. Three screws should be used to secure the decking to rim joists.

What Type of Screws to Use for Decking

Many people use nails instead of screws to secure their deck boards. Nails will do the job, and with the use of a framing nailer, can make the job go much more quickly. However, there is a downside to using nails to secure decking. Over time nails tend to work their way back out of the wood. This will eventually cause deck boards to come loose, creating a need for constant maintenance.

Screws, on the other hand, are much more likely to hold boards in place because they are threaded. This makes screws the better choice for this project, but only if you choose the right ones. Walk down the hardware aisle of any home improvement store, and you’ll quickly find that there are dozens of types of screws for all manner of projects. What at first might seem like a simple task, can quickly seem quite complicated.

What kind of screws is appropriate for securing deck boards? How long should they be? What color? Are screws for pressure treated wood different than screws for composite materials? What if you don’t want your friends and family to see those unsightly screw heads when they come over for that barbecue next week? First, remember that you need screws that are for exterior use. So, for this project, you will need either galvanized screws or corrosion-resistant screws to prevent rusting.

The type of decking material you are using will also determine the type of screws you need to buy. It is important that you use galvanized, stainless steel, or wood deck screws for treated lumber. Today’s pressure-treated lumber is made using two copper-based wood preservatives. While these preservatives do a great job preventing your deck from rotting, they will also corrode ordinary metal screws, ultimately resulting in the structural failure of your deck. For decks constructed out of cedar, use a stainless steel deck screw. Hot dipped galvanized screws are also an option.

When deciding which screws to purchase, remember that they will be visible, so color matters. Standard wood deck screws are grey, but deck screws are made in a wide variety of colors. It’s important to consider what will look best for your color and style of the deck when choosing deck screws unless you plan to use a hidden fastening system.

All three deck materials give you the option of using a hidden fastening system. As the name implies, hidden fasteners such as the CAMO Edge Deck Fastening System hide the fasteners from view, creating a clean look for your deck. If you decide to use the CAMO system, you will need to purchase the specially designed star drive screws that CAMO makes for use with this system.

When deciding what type of screw to purchase you’ll also notice that screw heads come in all sorts of shapes ranging from squares to stars to your standard Phillips-head screw. All three will work, but some may increase the pace of your work.

The square recess screw heads reduce the slippage and subsequent stripping of the screw head that can be common with Phillips-head screws, allowing you to work faster. Star drive screw heads, also known as Torx screws, create six points of contact with the compatible drill bit and are more recessed than Phillips-head screws, allowing for more torque, more stability and hence more driving power. The trade-off is that star head screws are a bit more expensive.

Once you’ve decided whether to spring for star-head deck screws, you need to consider screw length. How long should your deck screws be? Deck screws should be 3.5” in length for 2-inch thick lumber or 2-½ to 3” for 5/4-inch thick boards for the screws to drive deep enough into the joists to hold the board secure.

How Many Screws Do I Need for My Deck

Now that you’ve selected the type of deck screw you want to use, it’s time to calculate how many to buy. You don’t want to overspend by buying more than you need, but there’s nothing more frustrating than running out of fasteners as you near the end of your project.

The basic rule of thumb here is 350 screws for every 100 square feet of deck surface for standard 6” wide boards (5.5” actual width) and 16” spaced joists. If you aren’t using these standard sizes, use an online deck calculator to determine how many you’ll need.

How to Screw Deck Boards

Fastening the decking to the framing might seem pretty straightforward once you know how many screws to use for each board. However, there are a few things to consider before you get started to maintain the aesthetics of your deck.

First, make sure to position your screws 1” from each side of the board to prevent splintering.

Second, consider your screw spacing. Screw spacing should be uniform throughout the deck to maintain an aesthetically pleasing appearance. I suggest snapping a chalk line along your boards to assure even spacing.

There are also a few things to consider when driving the screws. Screws should be countersunk, so they are flush with (or slightly below) the surface of the board. Overdriving screws can cause the boards to split.

Additionally, pre-drill pilot holes for board ends to avoid splintering the wood. Drive screws at an angle where board ends meet at a joist to ensure they are tightly fastened to the framing.

Although screws are strong fasteners, occasionally you may have a screw break off as you are driving it into the wood. This frustrating experience can slow your project to a halt as you try to figure out how to remove what’s left of the screw.

If you’ve been unlucky enough to have no portion of the screw protruding from the board, you will need an extractor bit for your drill. Set the drill to counter-clockwise, place the tip of the bit on top of what remains of the screw, apply pressure to the drill bit, and pull the trigger to attempt to remove it.

If you’ve decided to go the hidden fastener route by using CAMO System fasteners, the process is quite different. CAMO uses a guide it calls the CAMO Marksman tool, which is used to guide the screws through the sides of each deck board into the framing of the deck. You will need to purchase the CAMO Marksman tool as well as the specially designed fasteners if you go this route.

The fasteners you select to attach your deck boards contribute to your deck’s beauty while helping to maintain its structural integrity. Properly selected and installed screws can create a beautiful finished product that will last for many years.