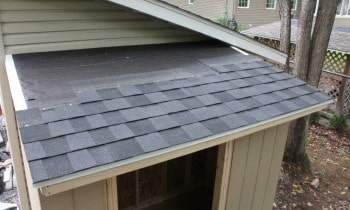 We’ve had some pretty bad thunderstorms in our area lately, with really strong winds. Many of our neighbors have ended up with some shingles missing, blown down the street, or strewn about yards. As I took a walk this morning, I noticed some shingles still had nails in them. I started to wonder how many nails should be used per shingle.

Manufacturers recommend 4 nails per shingle for standard slopes from 4:12 to 9:12 and five nails per starter shingle. Anything less than four will void any warranties offered. For steep slopes and high wind areas, use 6 nails per shingle. Nails must be long enough to penetrate at least ¾” into the roofing sheathing.

In this article, we’ll go over everything you need to know about nailing shingles to your roof, whether it’s your house, shed or even a doghouse. We’ll also cover other types of shingles, such as ridge cap shingles, so there won’t be any questions when it comes time for you to shingle your roof. 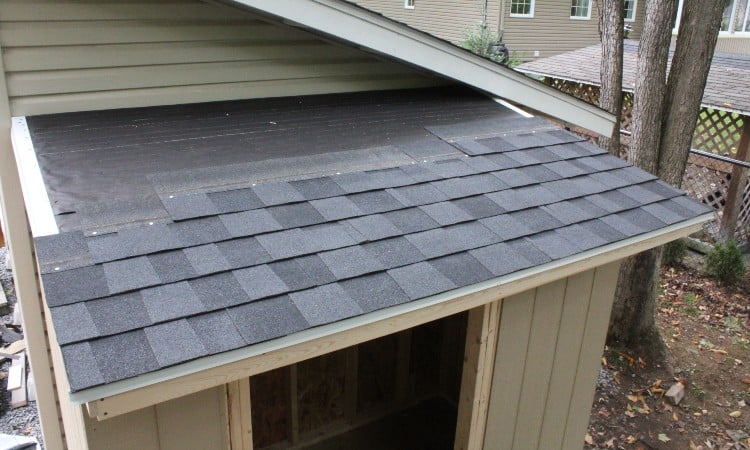 How Many Nails per Shingle Do You Need?

Shingles that are longer or shorter may require different amounts of nails. Manufacturers of those shingles will include specifications for how many fasteners are required for their shingles. Applying more nails per shingle is acceptable, within reason. However, 4 fasteners per shingle are industry standard.

How Many Nails for a 3-tab Shingle?

A three-tab shingle requires 4 nails per shingle. The amount of tabs does not change the number of nails required to secure the shingle. A 4-tab shingle of the same length will also require 4 nails – the same goes for architectural shingles.

How Many Nails Per Bundle of Shingles?

The amount of nails you will need per bundle of shingles depends upon the number of shingles in the bundle. Most bundles cover around 33 square feet. However, the size of the shingle itself will dictate the number it takes to cover that square footage.

Traditionally, a 36” x12” 3-tab shingle was the standard size for a roof shingle. Using that example, a 33 square foot bundle of shingles of that size will have 26 shingles in a bundle. If we multiple 26×4, we get 104. That means you’ll need 104 nails – minimum – to install that type of roof shingle.

How Many Nails for Starter Strip Shingles? 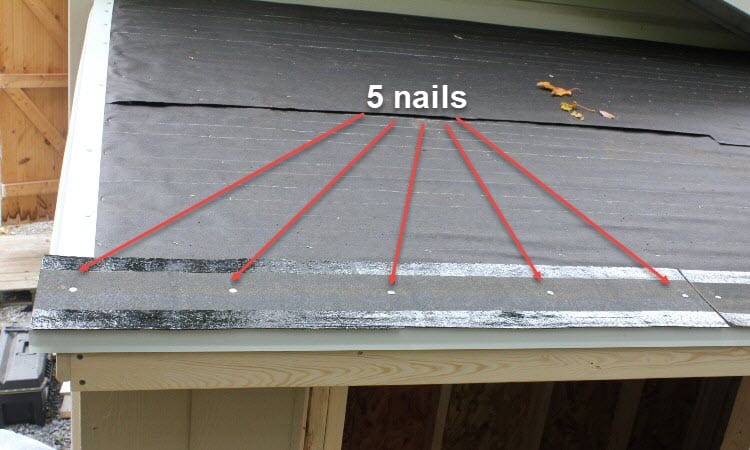 If you are installing starter strips – and you should always use starter strips beneath your first course of roof shingles – then you’ll need more nails. You should have at least 5 nails in your starter strip shingles, as they are your first defense against wind uplift and moisture penetration on your roof.

How Many Nails for Shingles on Steep Slopes

For roofs that have slopes of 50 degrees (15:12) or steeper, it is recommended that 6 nails are used instead of the required 4. Increased forces on steep-sloped roofs put more stress on roofing shingles, and more nails will ensure shingles remain in place.

How Many Roofing Nails per Square of Shingles?

Using our above example, if there are 26 shingles in one bundle equalling 33 square feet of roof coverage, then there would be 78 shingles in a square – 26 x 3. If each shingle requires 4 nails, then 78 shingles x 4 nails equals 312 nails needed per square of shingles.

How to Estimate How Many Roofing Nails Are Needed

When you go to the store to buy roofing nails, you will be buying them by weight, not number. Containers of roofing nails will indicate how many pounds of nails it contains, not necessarily a number. Therefore, you need to know how much a nail weighs so you can estimate the number of nails you’ll be buying.

Knowing the total amount of shingles, you’ll need for your roof will allow you to calculate the nails needed. You’ll use starter strips on the eave and rake ends, and any gable ends you might have. You’ll add up the linear feet of starter strip shingles required.

How Many Roofing Nails in a Pound?

Using a nail weight chart will tell you that it takes 160, 11 gauge 1.5” roofing nails to make one pound of nails. It is more common to buy 5 pounds – or more – of roofing nails. Using the same type of nail means 5 pounds of nails will give you 800 roofing nails – enough for 2.5 squares of standard 3-tab shingles.

What Nails to Use to Install Shingles Properly 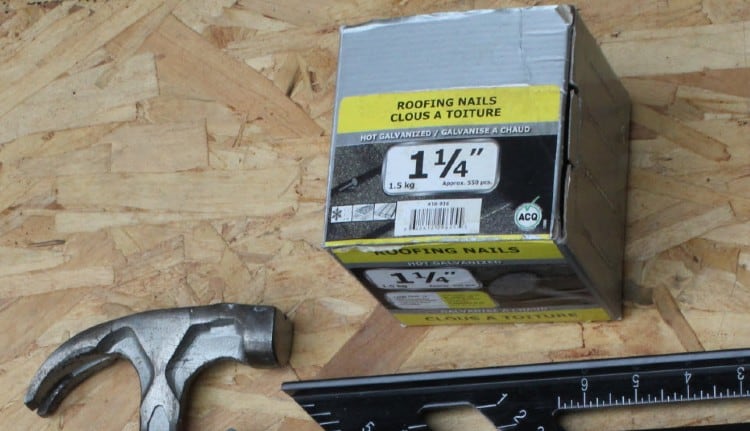 Roofing nails should be no gauge higher than 12, which is the diameter of the nail shank. 11 gauge is better because it is thicker and thus has greater holding power. Length should be no shorter than 1 ¼” and the head must be at least ⅜” in diameter.

Nails must penetrate the roof sheathing at least by ¾”. If the sheathing isn’t ¾” thick, then they must go through the sheathing by at least ⅛”. Abiding by these requirements will ensure you have the right sized nail.

Installations of shingles that occur over the top of old shingles require nails that are, at minimum, 2” in length. This is to ensure the nail penetrates through both the new and old shingle, plus penetrates the roof deck by at least ¾”.

Where to Nail Shingles? 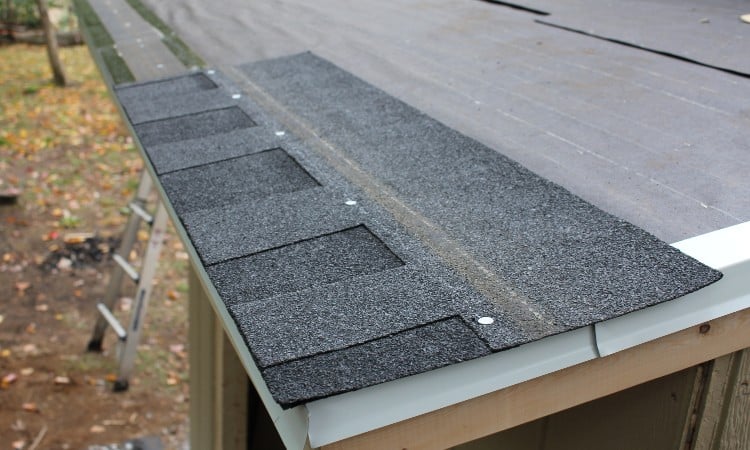 Shingles should be nailed just below the sealant strip, which is found running through the center length of all shingles, just above the tabs. This is a bitumen strip that acts to seal the course of shingles above it, adhering in such a way as to keep water from going up and under the shingles. Nailing through it will negate some of the sealing ability of the strip.

For high wind areas or steep roof slopes where 6 nails are required, nails on the interior of the shingle should be placed evenly spaced in pairs 1.5” apart. On a 3-tab shingle, you would place your first nail 1” from the edge, then place your next nail before the cutout by ¾”, and your next nail ½” above the cutout 1.5” from the previous nail. Repeat this same nailing pattern above the next cutout, and finish with your last nail 1” from the far edge.

Where to Nail Starter Strip Shingles

Starter strip shingles should be nailed 3 to 4” from the bottom of the shingle. Nailing too close to the bottom edge risks the nails being exposed in between the gaps of the first course of standard roofing shingles. Nailing the shingles too high may allow more movement in the shingle, damaging the sealant strip.

Where to Nail Ridge Cap Shingles

Ridge cap shingles vary in size, but you must use at least 2” nails regardless of size. These shingles will have a sealant strip and often be tapered after the strip to ensure the back side of the shingle remains hidden.

The nails will go ½” below the sealant strip, on the butt-end (non-tapered) side. Each nail will be 1” from the outer edge, for a total of two nails per ridge cap shingle.

How to Nail Asphalt Shingles to a Roof 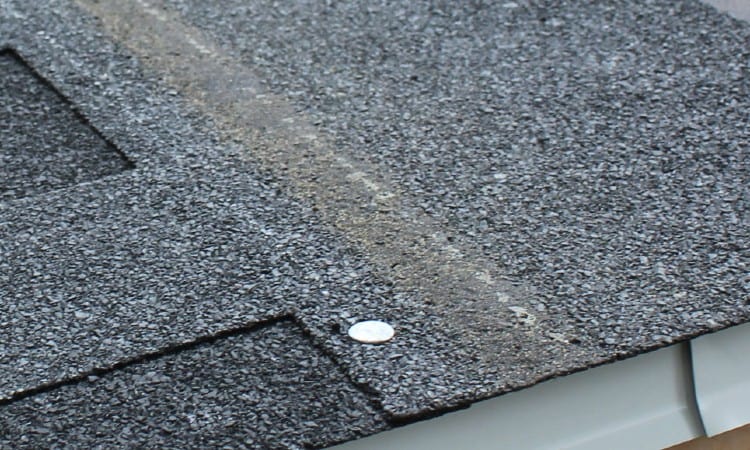 When nailing asphalt shingles to a roof, there is a right way and a wrong way to drive the nail. First, you do not want to nail at an angle. Nailing at an angle will cause the nail’s head to sit at an angle to the roof. That means part of the nail head will not contact the surface and will be a likely entry point for water.

Ensuring the heads of nails are flush with the roof’s surface will prevent moisture from creeping into the nail holes of the shingles.

Do not overdrive nails. When hammering a roofing nail, you don’t want the head to sink below the level of the shingle. If the nail looks “indented” on the shingle, you’ve probably driven it too far. Doing so risks damaging the roof shingle, as it will become more prone to cracking over time.

Under-nailing a roofing nail has the obvious consequence of being a water entry point. Without the sealing effect of a nail head hit flush to its surface, water will slide right under the nailhead and into your home.

Before you begin your calculations to determine the number of nails, you’ll need for your next roofing project, consult the specs for the roof shingles you intend to buy. Roof shingle manufacturers will indicate, either on the shingle bundle or online, what type of nail you need to use for their particular shingle.

Failure to use the right nail will negate any warranty offered by the manufacturer. What’s worse, you’ll leave your roof at risk of wind and water damage.

New roofs aren’t cheap, so don’t cut corners with your nails. Buy the right nails, install them properly, and take care you’ve put them in the right place on each shingle. When that next wind storm comes, you’ll be glad you did!