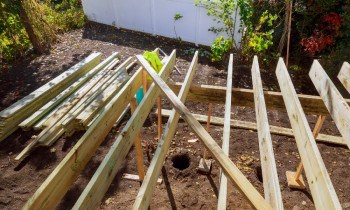 Building a deck, shed, cabin or home isn’t just a matter of slapping a bunch of wood together and hoping for the best. Although we have all probably seen a few structures that give us pause. Joist, rafter, header, and beam spans are important structural factors, so if you’re wondering how far can a 2×8 span without support, we’re here to help.

In this guide, we’ll explain what span means in terms of construction, factors that impact the span, and how much weight a 2×8 can support. Additionally, we’ll discuss using 2x8s for joists, headers, rafters, and beams to provide an in-depth look at their structural use in your project. 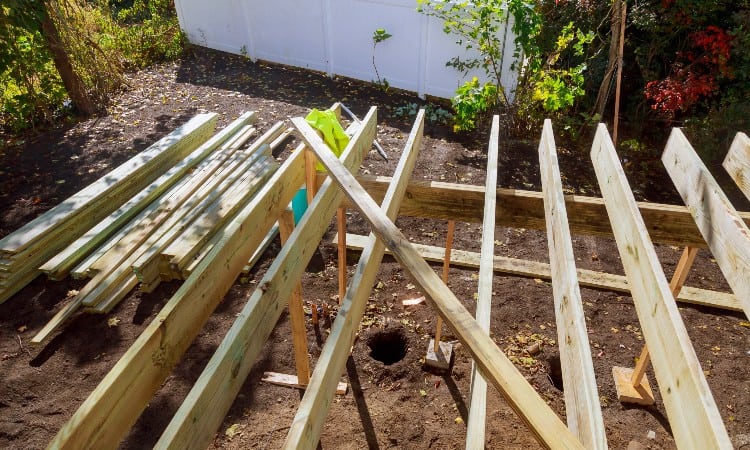 In the construction world, span is a word used to mean the linear distance a board, joist, rafter, or roof must bridge or cover without bending or requiring support. The distance is determined by many factors and conditions. The International Residential Building Code (IRC) of 2018 identifies the spans for joists, beams, headers, rafters, and roofs. It is used by both the United States and Canada as the foundation of their building codes and will be referenced within this article.

Span is how far a structural piece can traverse before it needs to be supported. It is commonly measured from the center of one support point, such as a wall, beam, purlin, or ridge to the center of the next support point. The span determines the location of structural supports and the size of the clear or unobstructed spaces in a building.

Floor joists span from wall to beam or wall to wall with supports spaced to optimize the strength of the building material used, or to determine the materials to be used. Rafters span from the top plate to ridge board or beam but may have intermediate support from purlins and braces, collar ties, or raised rafters. The roof span is the distance from outside bearing wall to outside bearing wall measured horizontally from outside top plate face to outside top plate face.

What Factors Impact How Far a 2×8 Can Span?

There are different factors that affect how far a 2×8 can span, including use or location, species of wood, grade, the spacing between joists or rafters, and load. The end-tag or grading stamp identifies grading association, mill, grade designation – select structural (SS), construction (#1), standard (#2), or utility (#3) – species, seasoning – MC15, KD-15, S-DRY, KD or S-GRN – and dimensions.

The species, type, or kind of tree determines the structural strengths of the timber and impacts support, flexing, and compression abilities. Douglas fir-larch is stronger than spruce-pine-fir (SPF) and will span further when other factors are the same.

Lumber is divided into different grades based on the number and location of knots and other imperfections in the wood, and its bending strength. Grades of wood classifications include appearance (how pretty regardless of strength), non-stress (not for structural requirements), and stress grades (for structural use).

Spacing Between Joists or Rafters

The spacing between joists and rafters determines the floor, ceiling, or roof area a structural member must support. Spacing between parallel members commonly is 12”, 16”, 19.2”, and 24”. Other spacings are used for non-dimensional materials such as engineered or metal members.

The load a structural member may carry limits the distance it can span before it is structurally compromised. Floor and ceiling joists and rafters must support the dead weight or load of all structural materials and furnishings or fixtures in their support area, plus any human or live load the area may experience.

Rafters must be built to carry the roof decking and finishing materials – shingles, steel, slate, or tile – and withstand wind forces and snow loads. Rafter span is determined by the dead load which is commonly 10psf, and the live load which can range from 20psf in warm climates to 30psf through 70psf in colder areas and reflects snow loads. The live load spans also change if the ceiling is attached or not attached to the rafters.

How Much Weight Can a 2×8 Support Horizontally

The amount of weight a board can support depends on the duration of the load, species of lumber, span, spacing, and even the moisture content. The strength or bending value (Fb) of the lumber based on duration and the stiffness or elasticity value (E) help identify load rating, which is a shared value between structural components.

The strength of a board is inversely proportional to the span – the greater the span, the less weight the plank will support. According to Weyerhaeuser, its Framing Series® 2x8s will support a total load of 799PLF (pounds per linear foot) when supported every 4’, 211PLF when spanning 8’, and 93PLF with a clear span of 12’.

How Far Can a 2×8 Span Without Support

Although the rule of thumb is 1.5 times the plank’s thickness in feet, the distance a 2×8 will span depends upon a variety of factors – species, space between boards, moisture content, use or application, plus live and dead load requirements. The ‘2×8 Joist & Rafter Spans’ Table below compares the maximum 2×8 spans for joists and rafters based on different factors. 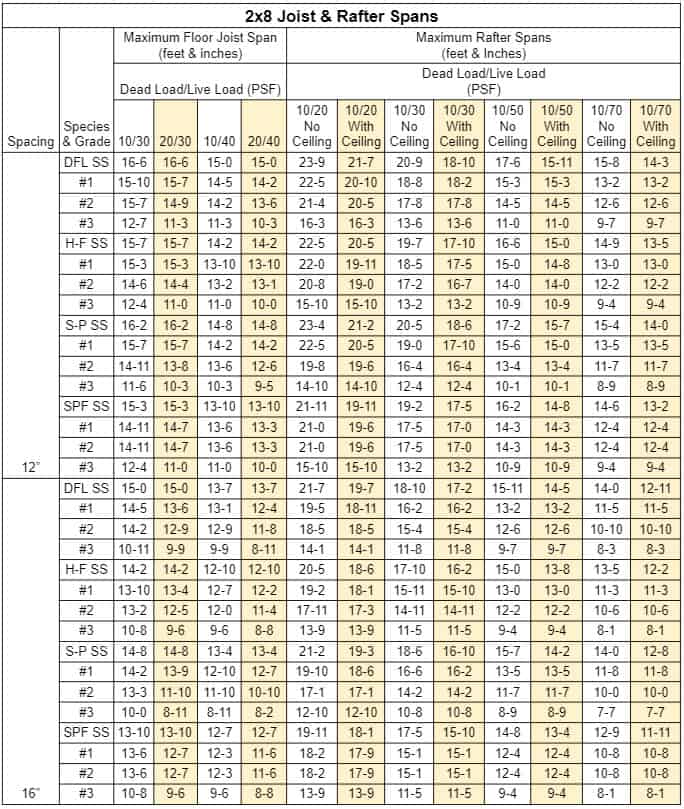 Common rafter lengths are measured as the theoretical length from the outside face of the supporting wall sheathing to the center of the ridge board or beam. Actual length is measured from the outer edge of the cleat or birdsmouth to the receiving face of the ridge board or beam for unsupported span. The rafter often has an overhang that extends beyond the support wall, which must be considered when purchasing lumber for rafters, but not in the span.

The distance 2×8 rafters can span depends on the species, grade, spacing, and loads. Rafters, unlike joists, are sloped and experience loads and forces differently than joists or beams. A look at a rafter span table shows the allowable spans are between 6’-7” and 23’-9”, depending on the factors and loads.

The IRC-2018 has span tables for different live and dead load conditions which identify spans based on lumber dimensions, grade, and species that are helpful. Always check the codes or with a Structural Engineer when planning a build, especially if it will shelter people. 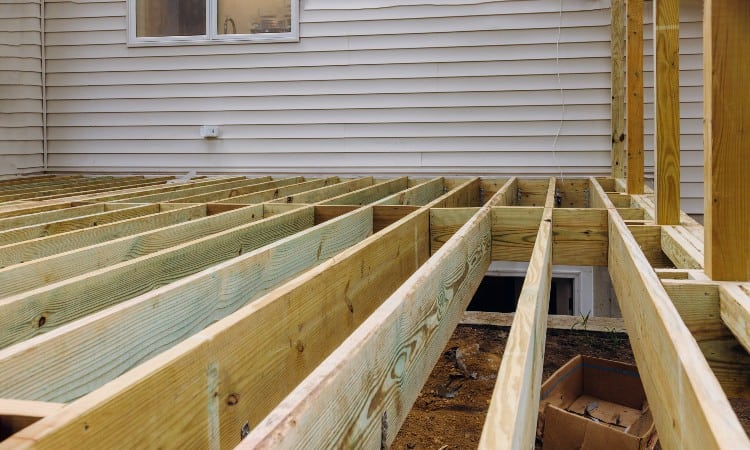 The distances 2x8s can span depend on use as well as loads, species, spacing, and grade. The IRC 2018 tables identify spans for different live and dead load conditions. Attics that can be lived in have different load conditions than those that are inaccessible. Rafters have total load ratings between 25psf to 90psf. A bedroom usually is rated for live loads of 30psf, while living areas and decks are 40psf. Dead loads can range from 5psf to 20psf, depending on the types of structural construction materials and use. It’s best to check local building codes or with the experts.

Depending on factors and loads, ceiling joists for an uninhabited attic can span from 10’ with SPF #3 and exceed 26’ with structural select (SS) Douglas fir-larch. Floor joists can span from 7’-1” to 16’-6” for the same lumber. Rafters also span from 6’-7” to 23’-9” with that lumber too.

To strengthen a floor or deck area or extend the span, a common practice is to sister or double the joists. Doubled 2x8s will span about 25% further than single joists with the same spacing. For a #3 SPF, that isn’t much, 1’-9” added to the maximum span, whereas doubling an SS Douglas fir-larch adds 4’-1” to the maximum span. The IRC doesn’t provide Span Tables for doubled joists, so it is best to consult a Structural Engineer or local Building Department.

Species, grade, spacing, and loads make a big difference when building with 2x8s or other dimensional lumber, as does the use planned for the timber. Table R507.5 of the 2018 IRC identifies beam spans for different joist lengths, and Tables R602.7 (1,2&3) header spans. We recommend checking your local codes or with the experts when determining beam or header spans.

Tripling 2x8s for a beam increases the allowable spans based on joists’ spacing and span too. A tripled #1 SPF 2×8 beam will span from 5’-8” to 9’-8” and #1 Southern pine 6’-4” to 10’-10”. Again, the number of floors and other load factors need to be taken into account, so consulting the pros is recommended.

Laminated veneer lumber (LVL) with nominal 2×8 dimensions is another option for joist, beam, and header construction. The manufacturers provide span sheets since the IRC doesn’t; a good practice is to check with a Structural Engineer. Based on different manufacturers’ specifications, the maximum span a 2×8 LVL is from 12’ to 15’. Spans are also affected by the species of wood used in the manufacture of the laminated joists, with western woods edging out eastern woods in unsupported span distance.

The distance a 2×8 can span depends on species, grade, purpose, location, loads, and several other factors. Joist spans range from 7’-1” to 16’-6 when all factors are considered. Most select structural (SS) and #1 grade lumber will span 12-feet or more, with SPF falling shy of that span. Rafter, header, and beam spans are also conditional on all factors too. Hopefully, you found this guide helpful and are better prepared for planning your next structural project.