You’ve completed your deck’s framing and it’s time to add the railing. Given that a deck railing’s purpose is to prevent people from falling off of it, it’s critical to have proper deck railing post spacing to ensure your deck is safe.

In addition to providing safety, you also want your deck railing to enhance as opposed to detracting from the aesthetics of your deck. Uneven spacing can look sloppy and unattractive.

In this article, we’ll review how to space your deck posts, so your deck is both safe and visually appealing. 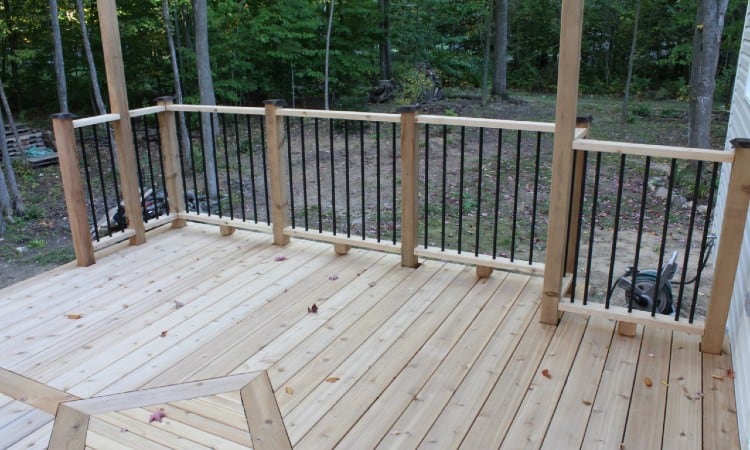 The importance of deck post rails is pretty straight forward. Deck railing posts are what support your deck rails, which in turn keep people from inadvertently falling off the deck. Improperly spaced posts can make a railing weak, creating a hazard that can cause serious injury and even death.

One could even make the argument that a weak deck railing due to poor post spacing is worse than having no deck railing at all. Whereas people may not venture to the edge of a structure with no rail, most will generally lean on a railing, expecting it to hold their weight.

When you consider that more than 6,000 people suffer serious injuries and even death every year from failed decks and balconies, this is something that should be taken very seriously.

According to the International Building Code, deck railing posts should be spaced no further than 6 feet apart. Sometimes local building codes will have more stringent regulations, so check your local building department for post spacing requirements. What is the reasoning behind this spacing? A deck railing should withstand up to 200 lbs. of pressure from any direction at any single point on the post or railing.

Decks 30 inches or more above grade require a safety railing that is at least 36 inches high. Keep in mind that although you may add a rail to a deck that’s less than 30 inches above grade, that railing still needs to adhere to these safety requirements. If there’s a railing, people will lean on it expecting it to hold them. If it doesn’t, even a fall of a couple of feet can cause serious injuries.

How to Space Railing Posts

Although your minimum spacing might be 6 feet, that doesn’t mean you start with the first corner post and move six feet outward from there. Unless your deck dimensions are evenly divisible by six, you’ll end up with odd and rather unappealing deck rail post spacing.

To achieve an aesthetically pleasing result, you need to space the posts uniformly. Below, we’ll discuss how to properly space your deck posts.

Calculating the Space Between the Railing Posts 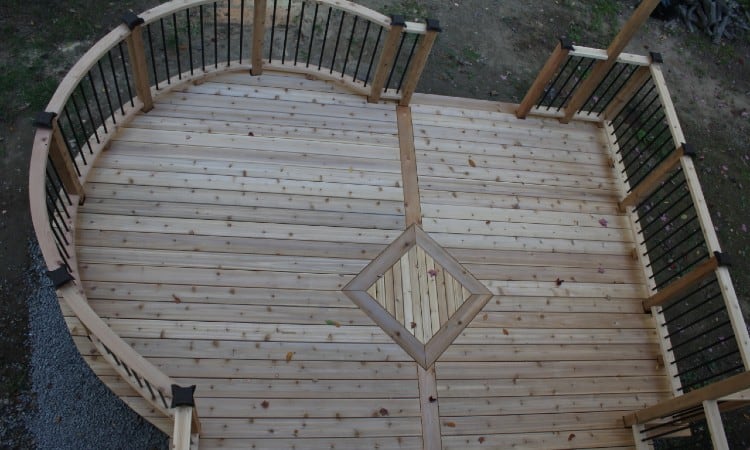 Begin by measuring the distance between the corner posts of the deck, making sure to measure each side of the deck that will have railings. If you are attaching posts to the inside of the frame, you’ll need one post on each corner.

For decks with deck rail posts on the outside, you’ll need two posts on each corner. You have a couple of options for the corners of externally-mounted posts. If you want the posts to be close together, mount each post an inch or two from the corner of the framing.

Another option is to mount each post 12 to 16 inches in from the corners with the top rails extending beyond each post to meet at the corner.

This decision is an aesthetic one, as each option will provide adequate. Just keep in mind that each style requires the addition of blocking in the frame to meet code.

When spacing the interior posts, make sure to measure from the center of each corner post as opposed to the corner of the framing to achieve proper spacing.

As most decks are attached to a home, you’ll need to account for the corners of the deck that attach to the deck ledger. While there are brackets for attaching a railing directly to the building, unless it’s structurally impossible with your deck design, use a post for these corners. Posts will be much stronger than brackets.

Make sure to mount the posts a few inches into account for the ledge board and provide an adequate buffer between the post and the house.

Divide the length of each side into equal lengths between five and seven feet, depending on the width of your posts. Unless your deck is a perfectly square shape, the space between your deck posts will vary with each side.

For example, let’s consider a deck with posts 12 feet apart on two sides and 20 feet apart on the other side. For the 12-foot sides, you’ll need three posts for each side: one for each corner and one at the halfway point (6 feet) between the corner posts.

For the adjacent 20-foot side, you’ll need three posts in addition to the corner post it shares with the two 12-foot sides. To achieve even spacing, the 20-foot side will have a post every 5 feet.

Do keep in mind that you may have to adjust your spacing based on the joists that run from the ledger board to the rim joist. A deck rail post cannot be installed at the same point where the joist attaches to the rim joist as you will not be able to install the necessary bolts.

If you have deck sides that are not even numbers, you’ll need to spend a bit more time calculating. For a side that is 17 feet 3 inches, for example, you’ll need to use the number of posts that keep the distance between each at 6 feet or less. In this case, you would need three posts, which would be one at every 5 feet 9 inches.

Remember, for thicker, 6’x6’ posts, you can increase the spacing to 7 feet. Any fewer than that and you are over the maximum spacing required by code.

The process is a bit different for posts that are set on the interior deck. With interior-mounted posts, you’re limited by the joists that run from the ledger to the rim joist. For the side of the deck that runs perpendicular to the joists, you’ll need to space your posts so they fit in the corner where the joists and the rim joist meet.

To achieve even spacing, make sure a uniform number of joists separate each post. For example, for a deck with 12 joists, install a deck rail post to every third joist.

As you determine the location of each post, mark the placement on the deck frame. Center a post on each mark and draw a line on either side of the post.

Measure the distance between the posts at the head and foot of the stairs then evenly space the posts, making sure they are no further than the building code standard of 5.5 feet apart. 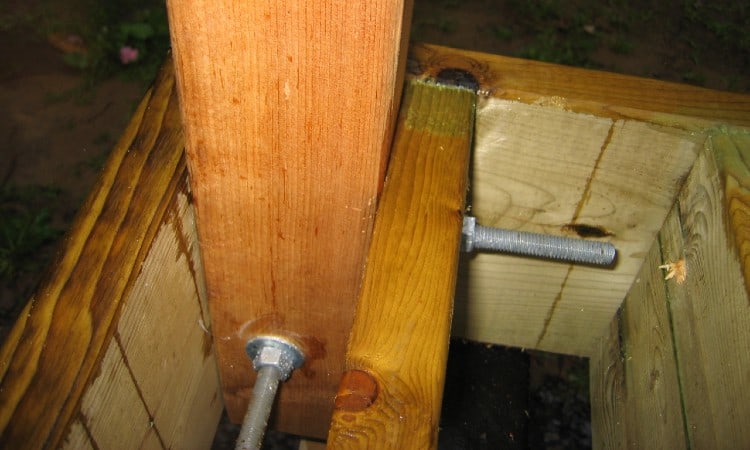 Proper spacing of bolts ensures that the deck railing is securely attached to the deck. Bolts that are spaced improperly can damage the post or the joists, eventually causing the posts to loosen, creating a hazard.

For proper spacing, holes for the deck bolts should be placed in the center of the post at least 1.5 to 2 inches from the bottom and the top of the frame. Vertically space the bolts no less than 5 and 1/8 inches apart. This will ensure that there is enough material surrounding each bolt to prevent weaknesses around the holes.

This gets a little trickier for decks with external railing posts as you’ll have two posts on each corner. With the two posts in such close proximity to each other, it’s possible for one set of bolts to block the other.

To prevent the bolts from coming into contact with each other, you’ll need to offset the bolt holes by 1/2-inch.

One common problem faced when spacing and mounting deck railing posts doesn’t have to do with the post themselves but rather with what you’re attaching them to the rim joists. While the posts are strong enough to support the required weight, sometimes a rim joist is not and will eventually rotate as stress is applied to the railing attached to it.

One solution to this problem is to add blocking and brackets that help to reinforce the rim joists. Another option is to design your deck by simply extending the footings another 36” so they also serve as the deck railing posts. This fits the building code as long as you do not notch the posts.

This method eliminates the weakest point of railing posts, which is the connection between rail and rim joist. As such, this is the strongest method for creating rail posts.

If you decide to use this option, you’ll need to plan in advance as once the footings are in the ground, there is no way to extend their length.

Keep in mind that this additional length means that each footer doubling as a rail post will need to go more deeply into the ground than a standard footer to provide adequate support. The general rule is about 1/3 of the post’s overall length should be below grade.

Do not overlook the importance of properly spaced deck post railings in the overall safety of your deck. Standard 4×4-foot deck posts must be spaced no more than 6 feet apart to provide adequate strength.

As with any construction project, make sure to check with your local building code before beginning deck railing post installation to make sure you are adhering to proper guidelines. It could save you time and money further down the road.

I hope this article has taught you how to properly space the railing posts on your deck. By using these guidelines, you can ensure that your deck railing will provide adequate support while also preserving the aesthetics of your deck.