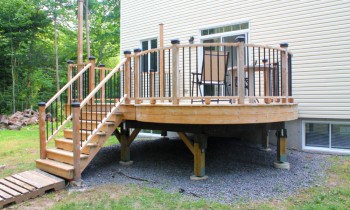 When I built my deck, one of the biggest questions I had was how far apart should I put my deck posts? One of the most difficult parts when building a deck is planning, especially when trying to determine your deck post spacing. Luckily, there are tons of handy charts to help get you started.

Ideal deck post spacing is 8 feet or less. The distance between deck support posts depends on the type of wood species used and the size of the joist and beam. There is no minimum span, and maximum spans can reach up to 15’.

Below we’ll take a look at some of the main considerations when asking how far apart should deck posts be. One of the biggest is knowing what your local building code allows. Most codes in North America offer charts that will take into myriad factors that we’ll talk about, plus we’ll go over how to read those charts, as they can be confusing. 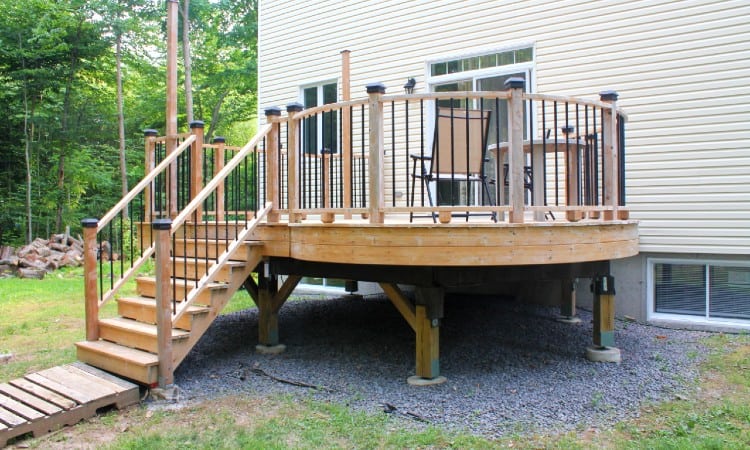 Factors that Influence the Spacing of the Deck Support Posts

The key factors that influence how far apart your deck posts when deck building will be are numerous. The most obvious factor is how your deck is laid out and the type of space it occupies. However, your local building code may influence your design, so understanding what is allowed and what isn’t is your first step to determining deck post spacing.

The spacing of your posts will also change if you don’t attach your deck to your house, or if you opt for 4×4 instead of 6×6 lumber. Similarly, the length of your deck joists, size of your deck beams, size of footings, and the overall height of your deck will all play a factor in how far apart your deck posts are – let’s take a closer look. 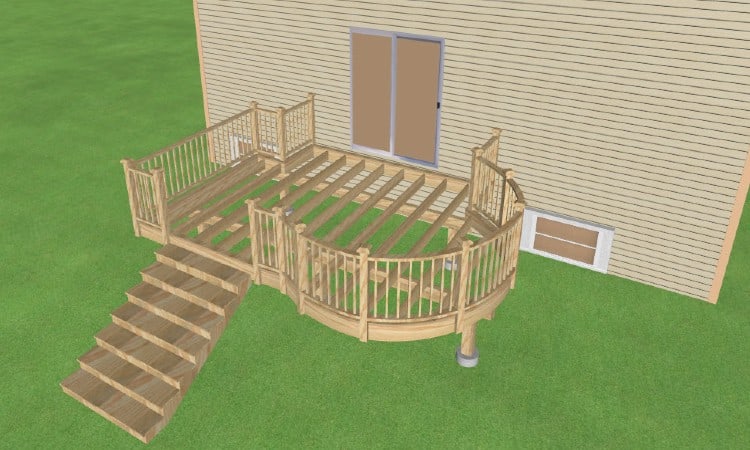 Support post spacing depends on where your beam and joists are in relationship to your house. Most decks have joists that are attached to a ledger board, which is affixed to the house. That leaves one beam to be supported by two or more posts.

Ideally, a simple design is best, as you don’t want to dig more footings than you need. Attaching your deck to your house negates the need for a beam – and posts – near your home. This should be your first option.

If you are unable to attach or don’t want to attach, your deck joists to your house with a ledger board, then your design becomes more flexible. Position joists to minimize the number of beams your deck will require. At a minimum, with no ledger board, you’ll need two beams and four deck support posts.

Keep in mind that the more radical your deck design becomes, the more posts you’ll need. For instance, if you want to build a deck to fit your circular, above-ground swimming pool, then you are going to need a number of posts to fit the curve of the pool. However, you can still orient your joists to ensure the fewest amount of deck posts are required.

The height of your deck actually can determine how many deck posts you will need. If you look at the deck post spacing chart below, you’ll notice that the higher the post, the shorter the beam span it can support. A shorter beam span means more deck support posts.

Additionally, many municipalities allow 4×4 deck posts for decks up to 5’ in height. This is good if you are looking to save a few dollars; however, code will not allow you to space your deck posts as far apart beneath your beam when using 4x4s. Therefore, if you want to minimize the amount of deck support posts, go 6×6 instead.

Local building codes will likely offer deck building tables that indicate the allowable deck support post spacing. It depends on the size of the dimensional lumber you use for your deck support beams and joists.

As mentioned above, code will also inform you how high you are allowed to build a deck using 4×4 support posts, which is usually never above 5’ from the footing to the deck surface.

The last factor is also the size of the footing. Use of two 6×6 support posts and an 8’ beam is not uniform, because of the length of the joists matters. The longer the joists, the smaller the gap between deck support posts becomes – an inverse relationship.

On the other hand, as your joist length increases, so does the diameter of your footings that your deck support posts sit on.

It is critical that you understand building codes before you begin – it will save you time during the permit process. An accurate deck plan will ensure your permit application is accepted the first time, saving you from having to revise and resubmit. In some jurisdictions, that can take weeks.

Size and Length of the Deck Beams 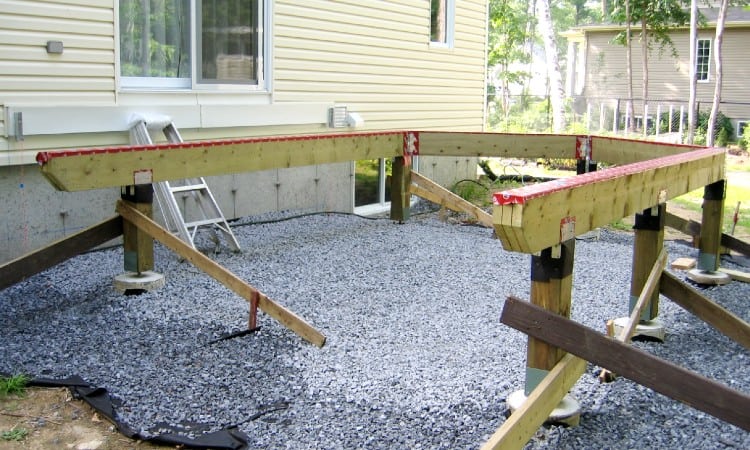 For example, you can space deck support posts for a beam that uses three 2x8s about 7’ apart. You can opt to use larger lumber, such as three 2x10s, and space your posts nearly 2’ further apart.

If upgrading the size of the lumber for your deck beam means using one less footing, then it might be worth the extra cost as you would save time and effort avoiding digging the third footing. The span tables below indicate exactly how many footings you need with each size of the deck beam. 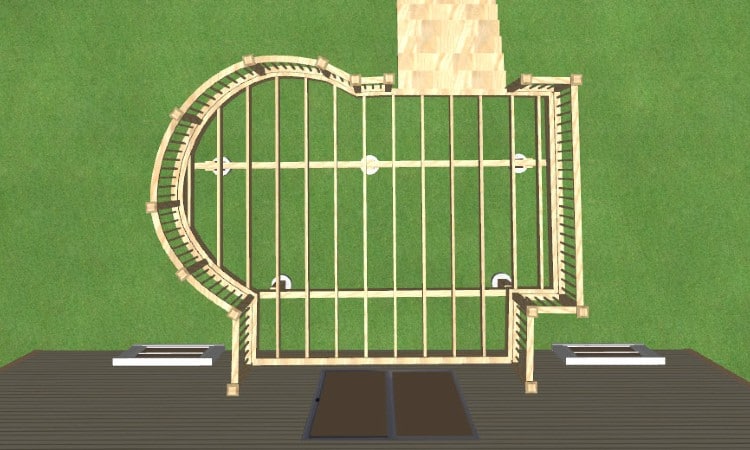 Like a deck beam, joists that are longer will require deck support posts that are spaced closer together.

This information could help you determine which way you’d like to orient your joists. Having long joists is nice because, in theory, it could mean a shorter beam. However, you’d likely need more deck support posts to support the longer joists.

Another issue is joist spacing. The spacing of your joists indirectly affects how far apart you place your deck support posts. 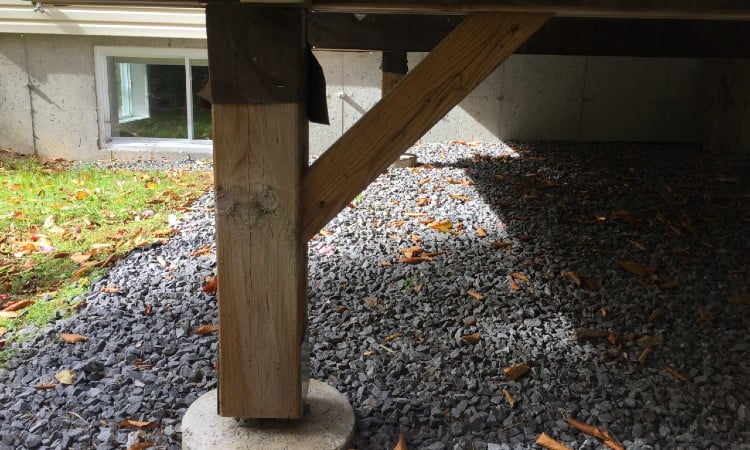 As mentioned above, many local building codes allow for the use of 4x4s as deck support posts up to around 5’ – or less. The benefit of using 4x4s is that you can put them on a smaller diameter deck footing, which thus requires less concrete and digging.

The drawback when using 4x4s is that you cannot use a three-ply beam – it won’t fit on top of the 4×4. You are limited to two-ply beams – that means two pieces of lumber, such as two 2x8s nailed together for use as a deck support beam.

When using a two-ply deck beam atop 4x4s, you are limited in terms of how far you can space your deck support posts. Smaller beams require more support posts, so any money you gain by purchasing 4x4s instead of 6x6s is more than likely lost because you’ll have to dig more footings to accommodate the weaker 4×4 support posts.

For example, a three-ply 2×8 support beam will span nearly 2’ longer than a two-ply 2×8 beam for joists of 12’. It is better to have two 6×6 support posts than three 4×4 support posts as the cost is negligible and the time savings are huge.

As I’ve already mentioned, tables exist that allow deck builders to determine how far apart they can place deck support posts based on joist, beam, and support post size. It varies because decks come in so many different sizes and shapes.

On the other hand, some rules don’t vary when it comes to deck support posts, such as:

To make it simple, place your posts no further than 8’ apart. Use 6×6 deck support posts and an 8” or 10” wide 3-ply beam. If you aren’t quite clear on how to read a load table, then simply following those easy guidelines will ensure you have placed your deck support posts properly.

Tables found in your local building code don’t explicitly say how far apart to place your deck support posts. What they do tell you is the maximum length of a beam for a particular joist span.

For example, the table will be called something like “deck beam spans”. This is confusing because it is not only telling you the beam span but also telling you maximum distances you can space your deck support posts.

One of these tables will first indicate the wood type – typically SYP (Southern Yellow Pine) or SPF (Spruce Pine Fir). Then it will list all the different beam types, such as 2 – 2×8, etc. Finally, it will list various joist lengths, such as 6’, 8’, 10’, and so on.

There are tons of spacing charts available online, made available by various municipalities to help their constituents better understand how to properly space their deck support posts to ensure they pass inspection.

Many North American municipalities follow the guidelines set out by the American Wood Council, which offers a comprehensive deck post spacing chart (Table 3A):

Understand that the above chart is only a guideline – many municipalities are not as strict as the AWC. Take, for instance, this municipality in California, which allows the use of 4×4 posts for decks up to 8’ high. The best source of information is always your local building code.

For those in Canada, many consider tables from Ontario and deck support post information found in tables from British Columbia are helpful.

Never take one municipality code to be the rule – code varies drastically depending on your geography. The frost line and snow load tables in Florida are different than Minnesota, so code has to take that into account, for example.

If you can’t find your local building code online or just want to play around with calculations to envision what your deck support post layout might look like, then visit an online deck post spacing calculator.

While these online calculators are great for visualizing what your deck might look like in terms of where you place your deck support posts, keep in mind that they are only an estimate. Every municipal code is slightly different and you want to base your final calculations on your local code – not an online calculator.

Let’s take a 10×10 deck as an example. We’ll assume that one side is attached to your house so that you will need only one support beam because your joists are perpendicular to the house.

Unfortunately, if you step down to a three-ply 2×10, you would still need 3 deck support posts because a beam of that size spans just under 10’.

Opting for the 3-ply 2×10, resulting in 3 deck support posts, would result in a seriously strong deck, and you would place the third support post right in the center of the beam.

Deck support beams are a critical ingredient to making your deck safe for years to come. An improperly supported deck can result in collapse – there’s a reason deck codes exist and you don’t want to invite thirty people over to a barbecue to find out that your deck can’t support that many people.

Once again, thanks for taking the time to read this guide. I hope you’ve found it helpful and are now confident enough to plan and space your deck support posts!