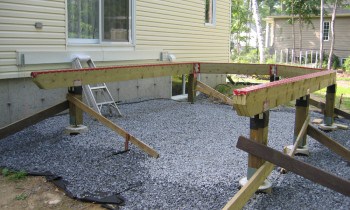 You’re planning that amazing deck you’ve always dreamed of, but you’re not sure how the framing should work. Having the right number of deck beams is essential to building a safe and sturdy deck. But how many beams do you need, and how should they be spaced?

The International Residential Building Code requires that you have enough deck beams to support the deck’s joists adequately. While this can vary depending on the size, species, and grade of the framing lumber, a deck with 2×8 southern pine joists spaced 16 inches apart must be supported by a beam a maximum of every 12 feet.

In this article, we’ll review how to calculate deck beam spacing based on different lumber sizes and how to determine the number of deck beams you’ll need for your project. 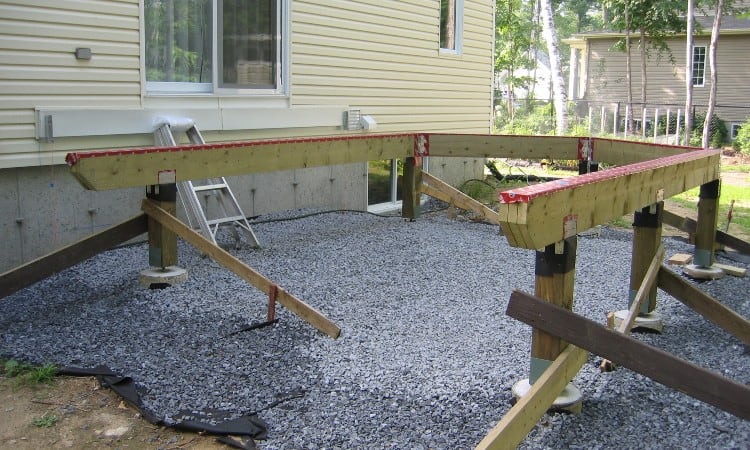 What is a Deck Beam?

A deck beam is a board or collection of boards that support the deck joists and decking. Beams are made out of a variety of treated dimensional lumber. They may be a single plank, or consist of two, three, or even four 2x8s, 2x10s, or 2×12 boards fastened together with bolts or nails.

Deck beams typically run perpendicularly to the joists and may run parallel or perpendicular to a structure. Beams rest on and secure to Code compliant and spaced deck posts and footings for support.

Smaller decks typically rely on a single beam that runs along the deck’s outer edge, providing support for the joists in conjunction with the ledger board attached to the house. Larger decks commonly require additional deck beams in the middle to provide support.

The drop beam design has two advantages. It allows the beams to extend beyond the post for a short distance which is called cantilevering. Cantilevering the beams allows the posts to be partially concealed beneath the deck, creating a more visually appealing look. Drop beams are also stronger than flush beams because they rely on the wood structure to support the weight rather than metal fasteners. 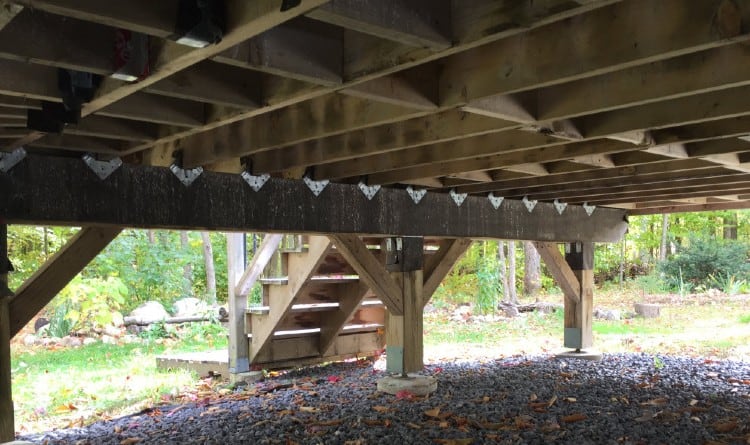 Why is Deck Beam Spacing Important?

Deck beams serve an integral role in the framing of your deck. Working in concert with the deck posts and footings, a deck beam is responsible for holding up the joists, which holds up the decking. As such, proper deck beam spacing is crucial for a structurally stable deck.

The International Residential Building Code (IRC) has strict requirements for deck beams and deck beam spacing. First, the IRC only allows certain dimensional lumber to be used for deck beams. In the past, 4x4s and 6×6 lumber could serve as beams, that is no longer the case. You must use 2x material bolted together to create a deck beam, or use metal or engineered lumber. So, rather than using a 6×6 beam, this would mean using three 2x6s bolted together. The IRC also regulates how far a deck beam can span before it needs support from a post and footing.

How Far Can a Deck Beam Span?

It’s essential to comply with the building code to ensure proper deck post, footing, and beam spacing. To provide support for the joists, deck beams must span the entire length of the deck. The thickness of the beam determines how far a beam can span between support posts. A double-ply beam can span in feet the number of inches it is deep For example, a double 2×12 beam can span up to 12 feet while a double 2×10 can span up to 10 feet.

Span is also dependent on the material. Most span tables use Southern pine for their calculations, but this isn’t the only material you can use for a beam. Red pine, fir, hemlock, cedar, redwood, and SPF (spruce-pine-fir) are just a few species that also function as beams. Keep in mind that some species are only available in certain parts of the country. For the calculations in this article, we will use treated southern pine, which is the most common wood for beams and offers the greatest span of any wood type.

Lightweight steel beams are becoming more popular due to their durability and precision. A steel beam can hold remarkably more than a wood beam, which reduces the number of support posts needed. This translates into fewer holes to dig and materials to purchase.

The span of the joists the beam is supporting also determines the maximum deck beam span between support posts.

According to IRC, a two-ply 2×10 beam supporting a joist that spans 8 feet between supports requires beam support posts every 9-feet. Whereas a 10 feet can span up to 6 feet 6 inches. 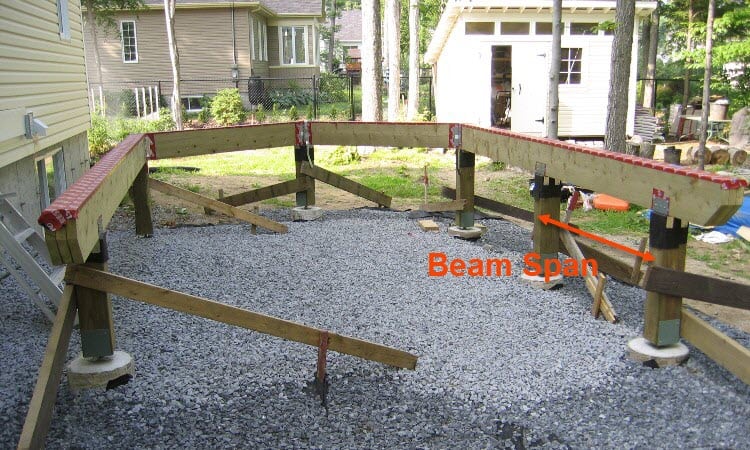 Since deck beams work in conjunction with the posts and footings used to support the deck, it’s important that footings are also the proper size. The footing dimensions are determined by assessing the joist length and the post spacing for the tributary area. The tributary area, coupled with the live load or snow load for the locale, and the soil’s load bearing value are used to identify the required dimensions of the footing (Reference Table R507.3.1 of the 2018 IRC)..

How to Calculate Beam Span

When calculating beam span, the general rule of thumb is pretty straightforward: the longer a beam spans, the bigger it needs to be to support that span. That is a fairly simplistic way of looking at it. To calculate beam span, you need to consider the wood species and grade, size of the beam, and the joist span. Below are some common beam span values from Table R507.5 of the 2018 IRC:

What are Cantilevered Beams?

A cantilevered beam extends beyond the end post or posts. Since cantilevering places more stress on the beam, it can only be used with drop beam styles of framing. 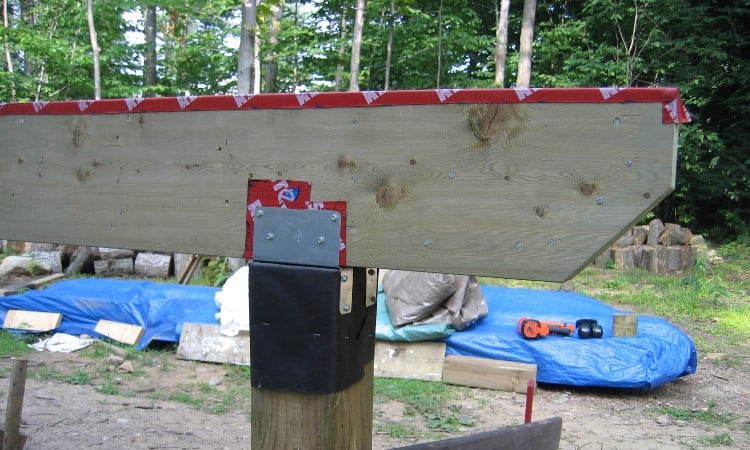 How to Space Deck Beams

To properly space deck beams, you need to consider the joist span. The limitations of how far a joist can span determines just how many beams you’ll need.

A deck with 2×8 joists spaced 16 inches apart will need to be supported at least every 12 feet to provide adequate support for the joists and comply with building codes.

How Many Deck Beams Do I Need?

Once you understand the limitations of the joist span on your deck, you can determine how many beams you need.

This may mean you only need one beam plus the ledger board attached to the house for smaller decks. You would only need one deck beam for a small deck that is 12 feet wide or less in the above example.

Remember, you need enough beams to keep the span of the joists in code. If the width of the deck exceeds this span, you’ll need more beams. Even though a deck that extends 15 feet from the house with 2×8 joists may only be a few feet longer than the minimum span, you’ll need an additional beam to provide adequate support and adhere to building code.

This is where cantilevering can save you time and money. For a deck that is 15 feet wide with 2×10 joists spaced at 16 inches apart, you have two options. You can use two beams, one at 7.5 feet and one at 15 feet, to provide support. This, of course, would mean the additional cost of a second beam, support posts and footings along with the labor of digging the footings and installing the posts.

Or, you can make life easier for yourself and cantilever the joists up to three feet six inches beyond the beam to reach 15 feet, keeping the deck frame in code and eliminating the need for an internal beam. Remember, the IRC allows you to cantilever joists up to one-fourth of the joist’s span from beam to beam (or in this case, from ledger board to beam). This means for a 12-foot span, you can cantilever up to three feet beyond the beam. However, the type and grade of wood needs to be considered.

While cantilevering can add width to your deck and eliminate the need for additional footings, posts and beams, sometimes it isn’t enough. A 20-foot wide deck, for example, would require two beams: one at 10 feet and one and 20 feet in order to support a deck with 2×8 joists spaced 16 inches apart.

How Do I make a Beam Longer Than the Length of the Lumber?

First, plan where the splice will be located on the beam. If you have internal beams, stagger the splices on each so they aren’t lined up on the deck. This will ensure a stronger frame.

Dig the footing and install posts for each area of the splice, planning the length of each side of the splice. For example, to cover a 30-foot space, you might use two 2x8x10s and two 2x8x20s. Cut a 3-inch-wide notch in the post to match the width of the beam. Install the two beams so the ends butt together and rest on the notch. Secure the beams to the post using four carriage bolts.

Making sure that your deck has the right number of beams that are properly spaced is critical to ensure it adheres to building code requirements and is safe for your family and guests. Although we used International Residential Building Code requirements to make our calculations in this article, it’s important to check your local building codes to see if your municipality’s requirements are more stringent.

Determining proper deck beam spacing can be confusing. I hope this article answered all of your questions. If you are still unsure what the deck beam requirements are for your deck design, feel free to reach out using the comment box below.