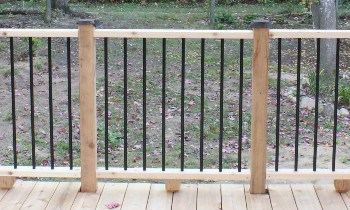 When I was building my first deck, one question I ran into was deck baluster spacing. I knew they couldn’t be too far apart, but I wanted them as far apart as possible to achieve a certain look. After some research, I found that there is a maximum gap size that is universal throughout North America. 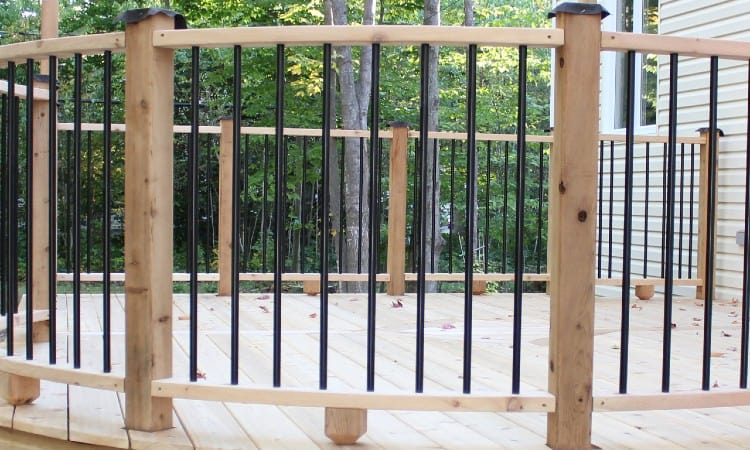 Are Balusters and Spindles the Same Thing?

Yes and no. Generally speaking, balusters and spindles perform the same function in a deck railing system. They are the vertical supports that connect the top railing to either a bottom railing or the deck surface.

For the most part, people tend to interchange the two terms. But there is a difference in terms of appearance.

A spindle is narrower than a baluster, is often turned on a lathe (cylindrical), and can have some decorative features on the top or bottom. Many prefabricated aluminum railings use aluminum spindles – they are simply narrow columns. These are ideal if you want a good line of sight through your railing system.

Balusters are not as narrow as spindles, are also usually turned on a lathe, and often have decorative features such as a unique profile on the top and bottom. Metal balusters may have an arc and are not cylindrical, but rather flat on either side. High end pre-fabricated aluminum railing systems use this style.

Don’t forget about ‘pickets’ and ‘uprights’. You may hear about those terms in place of ‘baluster’. Generally, a picket is simply a rectangular piece of wood with angled ends on each end. These are commonly found in bundles at home reno stores and also on cheaper prefabricated railings at those same stores. Most often, they are about 1.5” wide – 2” at the most.

Last but not least, don’t forget about the uprights. An upright is a general term to describe a baluster. It would usually refer to a picket, although this term simply isn’t used much anymore.

Let’s get the important info out of the way right now: the space between your deck balusters – stairs or deck – cannot be more than 4 inches.

When an inspector comes to check your deck, he’ll have a 4” spherical ball. That’s what he uses to check your baluster spacing. If the ball can squeeze through fairly easily, then you’re going to have to redo those balusters and make them closer. 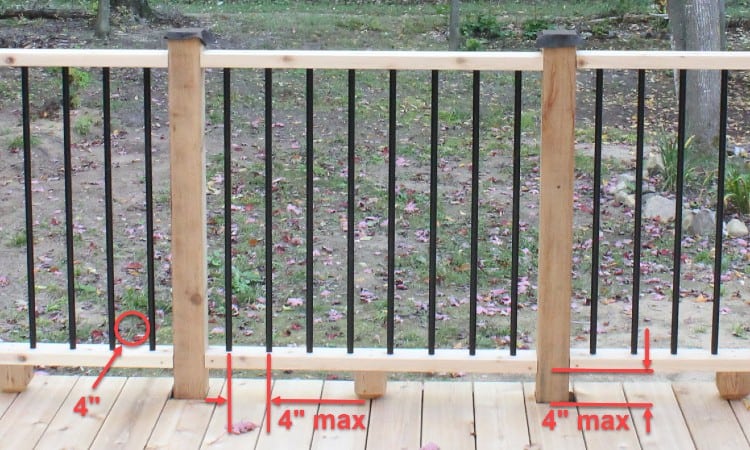 Note that your railing cannot have more than a 4” space between the deck surface and the bottom of your bottom rail. This does not apply to decks whose balusters attach to the deck itself and not a bottom rail.

Again, to avoid problems, space your bottom rail 3.5” from the deck surface to satisfy building code.

Also, remember that your railing must be 3’ from the surface of the deck – minimum. So if you are making your own balusters, just know that you aren’t cutting pieces that are less than 3’.

Be sure to conform to building codes. A building inspector can potentially hit you with some fines if he comes out and finds you have spaced your balusters too far – he’ll also make you redo the whole railing and possibly make you pay another fee.

Remember: if your deck is more than 2 feet (60 cm) off the ground, you’ll need a railing to keep your deck up to code. Your railing can’t be less than 3 feet (90 cm) from the surface of the deck. And no matter where you are in North America, the rule of 4” (or 10cm in Canada) remains consistent for baluster spacing.

There are two ways to calculate the total amount of balusters you’ll need.

Here’s a real-life example to better show you how to calculate deck baluster spacing yourself.

Here’s the deck baluster spacing calculator that will tell you how many balusters you’ll need per the length of your railing. While the calculation isn’t that complicated, I recommend using this tool to at least check your math after you’ve calculated it yourself.

How to Calculate Baluster Spacing on Steps

While baluster spacing on a deck rail is more straightforward, putting balusters on steps is also easier than it looks if you know where to begin.

Remember that stair treads have to be a minimum of 10” wide – some New England states allow 9”, but for this article, we’ll assume it is 10” where you live. 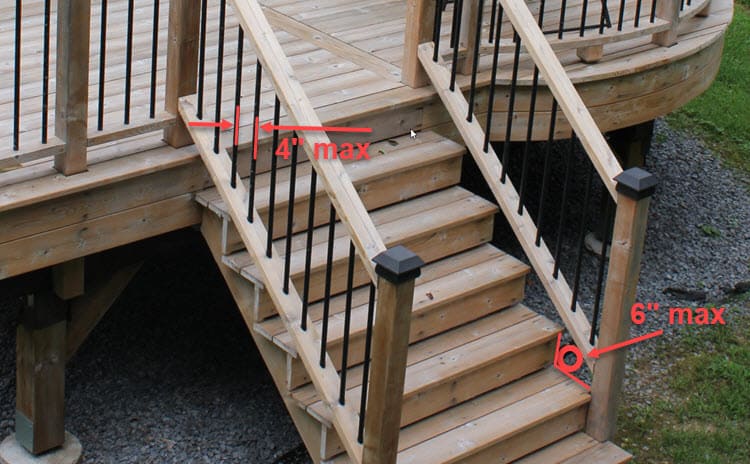 Also, ensure your railing is at least 3’ from the top of the railing to the nose of one of the stair treads.

Let’s say you have a tread width of 11”. Your balusters are 2” wide pickets.

If we divide that tread in half, we get 5.5”. Putting our first baluster at the front of our top stair tread, we then put our second baluster on the same tread at 5.5”, where the front of the baluster sits flush with the center mark.

If you have extra-wide treads on your deck steps, you’ll have to put three balusters per tread, in which case you would just divide the width of the tread by three. That would tell you the distance between the front of each baluster starting at the baluster at the front of the tread, flush with the riser below it.

Understand that this section is only relevant for stairs that have balusters that attach to a top rail and the stair stringer. If you are using a prefabricated kit, then you don’t have to worry about where to put your stair balusters – it’s already done for you.

If you are using a kit, make sure that a 6” sphere can’t pass between the area under the bottom rail, where the tread meets the bottom of the riser. If so, you’ll have to lower your bottom railing on your stair railing system.

There are many ways to space your balusters evenly along your deck railing. Let’s take a look at several different ways you can go about accurately measuring out your balusters for a uniform appearance.

A general rule of thumb is that the spacing of balusters should be about 1.5 times the width of your baluster. So if you have 2” balusters, then a 3” gap is aesthetically pleasing.

Spacing deck balusters that are a material other than wood is no different. Specialty balusters that have a pattern, where the balusters alternate between straight and profiled, will usually come with installation instructions.

If not, remember that the furthest gap between two profiled balusters must still be only 4”. In other words, there cannot be any space between your profiled deck balusters more than 4”.

Horizontal deck balusters are increasingly popular these days, as I see more and more popping up around where I live.

The same rules apply to these types of balusters – no gap more than 4” apart, with a maximum spacing of 4” from the top of the deck boards, and a minimum of 36” high for the entire railing.

To calculate the number of horizontal balusters you’ll need, use the same formula we used for vertical balusters with one major change. Instead of measuring the length of your railing, you will measure the height of your railing post. Here’s how:

Deck balusters are first and foremost a safety item on your deck and should be fastened and spaced according to code. Don’t space your balusters 4” apart, even though code says this is allowed. Over time, balusters can warp, shrink, or twist out of shape, resulting in larger gaps. Shrinking these gaps during installation by a quarter or half an inch can save you tons of trouble in the future.

Thanks for taking the time to peruse this deck baluster spacing guide. As always, if you have any suggestions for content that you think could make this guide better, then please don’t hesitate to comment below or drop me a line. And of course, best of luck with your next deck baluster and railing project!