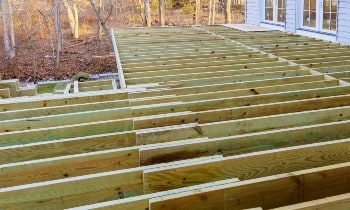 Are you in need of more deck space and wondering how to extend your deck? Does your deck have a bouncy or spongy joist, or a joist beginning to rot? An easy solution to both problems may involve sistering deck joists.

Sistering is the pairing of an existing joist with a plank of equal width and thickness along part or all of its length to repair rot damage or to strengthen a weak joist. It is also the overlapping of joists to extend a deck by creating a cantilever or to join a new deck section.

In this article, we’ll explain what sistering means, why it is used, and some of the building code requirements. We’ll discuss how to sister joists for different purposes, and how to properly fasten sistered joists. By the end of your read, you’ll better understand how to use sistering to repair or strengthen a joist, or to extend a deck. 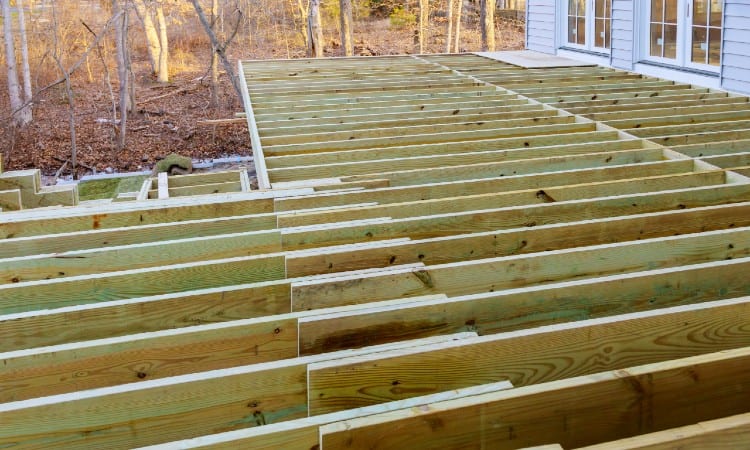 What Does Sistering Joists Mean?

Sistering is a term with a variety of structural purposes where a length of similar dimensional lumber is attached to a joist or rafter for reinforcement or extension. Sistering depends on the purpose and structural requirements, and any code parameters.

It may refer to overlapping and securing two planks of the same thickness and width where they cross a beam or bearing wall to extend the length. It may be used to bond new construction to an existing structure, or when lumber of required lengths isn’t available. The longer the overlapping distance, the stronger the structural connection produced.

Pairing two boards together along their full length where they are supported at both ends is another way to sister joists or rafters. This may be done during construction or later in the life of the structure. Adding a second joist along the full length of another is also known as doubling up, or a double joist. The two planks should be similar dimensions and be fastened securely together from both sides.

Another way to sister is to attach a length of similar lumber along 1/3 or more of the length of an existing joist or rafter. The sistering piece may even run the full length of the existing joist except where it is supported at the ends. This is frequently done to strengthen a rafter or joist.

The term sistering can also apply to sandwiching a joist between two boards, or when joining two planks together by sandwiching the butt joint between two shorter lengths of similar dimensions. This is also known as double sistering or scabbing. Scabbing however often is done using plywood or mismatched lumber.

Why You Need to Sister Deck Joists?

Sistering is the overlapping of joists to extend the span or length, or pairing or doubling up to repair or strengthen an existing joist. There are many reasons you may need to sister deck joists in one way or another.

Extending an existing deck is an obvious reason to sister joists. Overlapping new joists with older joists where they cross a support beam or wall will tie the new deck in with the old. It utilizes an existing support structure but may require the opposite end of the new deck to be supported.

Sandwiching the butt joint of two joists between lengths of similar material will also lengthen a joist to span acceptable distances if longer boards aren’t available or won’t fit. This often requires the use of bolts or lag screws for fastening the sandwiching boards with the joist, especially if the joint is unsupported.

A common reason to sister joist is to effect a repair. Over time a joist may sag, become spongy, cracked, or split. Lifting and leveling the damaged section and then sistering it with timber of equal dimensions strengthens and repairs the problem. The added piece may be the same length as the original or extend two to four feet beyond the weakened area.

Some joists experience rot and decay more quickly than others. The damage may be superficial or only where nails or screws penetrate, leaving much of the plank structurally sound. Cut out the rot and sister a board of equal width and thickness where the damage is, or the full length. Refasten the deck boards with approved fasteners that won’t cause rot.

Two other reasons for sistering involve strengthening joists for structural support. Doubling up joists from support to support improves carrying capacity. This is especially important if the deck will need to support a heavy object such as a hot tub or spa. Sistering also is used to strengthen a joist that has been compromised with a notch or hole to allow something to pass through it.

Pro Note:
It is recommended that sistered or double exterior joists be covered with a waterproof membrane or tape. The material will prevent moisture and debris from becoming trapped between the planks and causing rot.

The International Residential Building Code (IRC) is a general guide that has been adopted by many States. It doesn’t specifically address sistering, so a quick search of your local Code may provide information about sistering, or show nothing.

Sistering is reinforcing an existing joist; it isn’t altering the structure as long as joist blocking or bracing is maintained at a maximum of 4-foot increments. Doubling joists is known as an alternate building practice. These may be the reasons your local code doesn’t address it. Having said that, here are some examples of how different local ordinances address sistering.

Some Building Codes require sistering to extend a minimum of 4-feet on either side of the affected area and have ½” bolts in a ‘W’ pattern for a stronger connection. Other Codes identify that the only acceptable way to sister a joist is to double it full-length with both ends of the new joist supported on bearing points.

In some municipalities, the local Code is more specific regarding sistering. For a badly deteriorated joist, full removal and replacement is required. Another requires the removal of the affected section and replacing it with a new piece of matching dimensions. The new and old sections of the joist must then be sandwiched between two matching dimensional boards that extend 2-feet or 4-feet beyond both ends of the repaired section.

Pro Note:
It’s always a good practice to check with a local Building Inspector or a Structural Engineer (SE) if you have questions or concerns.

How to Properly Sister a Deck Joist

How to properly sister a deck joist depends on what and why you are sistering. Sistering joists to extend a deck is different from sistering a joist to repair or strengthen it. So, the what and the why affect how.

It is acceptable to cantilever joists beyond the end support beam depending on the type and grade of wood, the plank dimensions, and the joist spacing. However, many localities restrict cantilevering to a 24” maximum, so check your local ordinances. A deck that overhangs the beam by 1 to 3 feet, it is already cantilevered. Further extension may require the addition of posts and beams to support the outer joist ends.

Removing the rim joist will expose the ends of the joist. If they don’t extend beyond the beam, a cantilever extension is possible. Technically, a joist may extend 40% of its supported span past the beam.

Sistering joists for a cantilever requires removing the rim joist and sliding the new joist in beside the existing one. The section being inserted and sistered should be twice as long as the cantilever. So a 2-foot extension will be 4-feet sistered to the existing joist with appropriate fasteners – 3” nails in a ‘W’ pattern every 12-inches, or ½” carriage bolts in a tandem pattern every 16-inches – depending on the local codes.

Extending a deck by sistering joists helps to tie the old and new sections together and is similar to cantilevering, except it requires additional supports being installed to carry the extension. Remove the rim joist to expose the existing joists and beam.

Install the posts and beam at the appropriate distance. Slide the new joist onto the existing beam and sister it to a joist with appropriate fasteners. Since both ends of the new joist will be supported, the sistering overlap is only the width of the beam plus any existing cantilever.

Repairing or Strengthening a Joist

Check the condition of the joists if a deck section is sagging or spongy. A string-line, level, or standard eye-balling can identify what is wrong. A joist that has some rot or a crack could be replaced or sistered with matching dimensional lumber. A short section pairing may be all that is necessary, or a full sistering or doubling-up.

To cut out a damaged section, back-out fasteners from deck boards above it, remove and replace it with similar dimensional wood. Sandwich the replacement between two sisters of equal dimensional lumber that extend two or more feet past each end of the cutout. You may need to install temporary supports to hold and align the cut joist. Depending on the magnitude of damage, it may be better to remove the affected joist and replace it. 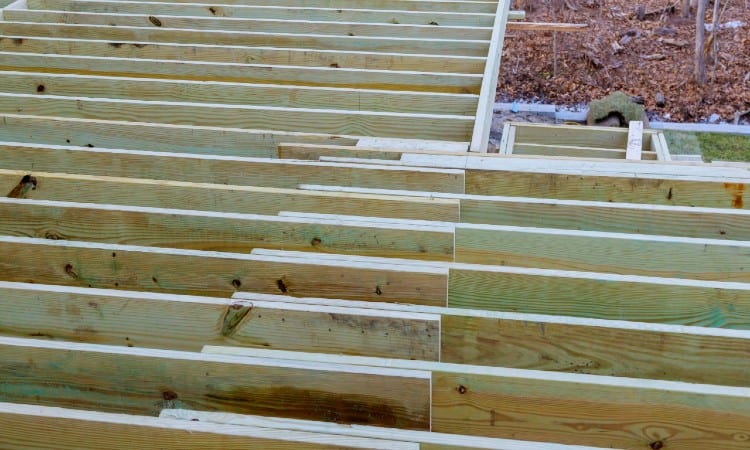 The nailing pattern for sistering depends on the type of sistering, and how much space you have to work. Swinging a hammer between joists may be difficult depending on joist spacing and ground clearance. It’s also often more difficult to drive nails into aged wood.

For a full sister or doubled joist, three 16d common nails every 16-inches is acceptable. It should be noted that hammering will put additional stress on the piece being sistered. You may choose to predrill and use two 3-inch lag screws or 4-inch bolts every 24-inches instead.

When sistering a damaged or weak joist with a piece shorter than full length, the ends of the new board are not supported underneath. Double or triple the nail pattern at the ends to improve shear strength. Lag screws or bolts may be used instead of nails, but in a tighter pattern than a doubled joist.

The nail pattern for double sistering or sandwiching a joist is similar to when sistering a damaged joist, except it should be done from both sides. Alternatively, use two 4” or 4½” lag screws in a ‘W’ pattern, screwing from both sides to bond the tripled section together. Two 5-inch bolts could be used instead of nails or lag screws with two every 12-inches or less, depending on the repair length.

To repair or strengthen a deck joist, sistering a board of equal width and thickness for part or all of its length is common practice. It is also used to extend the existing deck area by cantilevering sistered joists over the end beam or to connect new deck construction with old. Always check the local building code and fasten sistered joists correctly.

I hope you better understand what is meant by sistering deck joists and how and where to use them. If you enjoyed the article and found it helpful, please share it with others. As always, your comments and suggestions are appreciated.