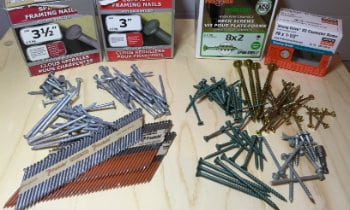 You’re all set to build your shed but what should you use to put it together? Even after completing several DIY projects I’m still confused about when is it best to use nails or screws and what size fastener is best?

So, what is better for shed building, screws or nails? The quick answer is to use nails for framing and screws for finishing – sheathing and subfloor. Screws have the grip strength to keep plywood tight. But nails have the shear strength to keep structural members where they belong.

I’ve gone through box stores and my local hardware stores, I’ve asked some pros, and surfed the net trying to find an answer. Do you know how many different sites there are about nails and screws? A lot more than I cared to look at! So I decided to put all the information in one place, so next time I’m unsure, I can come back to this guide and check.

Hope you find it helpful too! 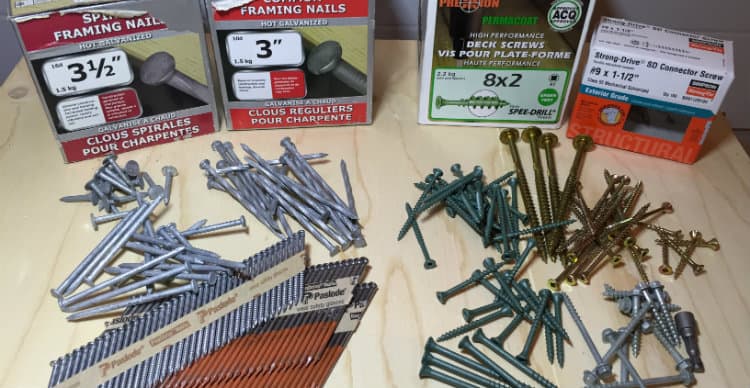 What is Better, Screws or Nails for Shed Building?

The old saying screws for grip strength, nails for shear is a good recommendation. Use nails for framing and screws for finishing – sheathing and subfloor. Although screws can be used for framing, the Building Inspector may not agree – most building codes still identify 10d and 16d nails as the norm, not screws.

When using nails or screws for construction, my preference is hot-dipped galvanized spiral nails, or ACQ rated deck screws. Less concern about rusting out, and they hammer or drive in easier. Also, spiral shank nails are easier to remove than ring shank nails when I make a mistake.

For joists and plates, beams and headers:

For sheathing, subflooring, and decking:

Advantages and Disadvantages of Using Nails

Pro Note: the quality of the fastener, whether screw or nail, depends on the manufacturer and the warranty of that manufacturer. There are a lot of cheap, poor quality fasteners out there. I’ve had screw heads break off while driving, and nails actually bend like an ‘S’ with a good strike. Good quality may be more expensive, but much less frustrating!

Brief Comparison of Nails vs. Screws

Nails and screws are made from pieces of a metal rod that are pressed or squeezed to form their three different parts. Although similar, there are unique differences.

The nail consists of the head, the shank, and the point.

The screw consists of the head, the threads, shank diameter, root diameter, and the pitch.

What are the Main Differences between a Screw and a Nail?

The main differences between a nail and a screw are what they are designed to do. A nail is designed to hold things together and have a strong shear force. The shear force means sliding forces applied against the two pieces the nail is holding together. The screw has a powerful grip force due to its threads. The grip force is the force needed to pull the two pieces apart.

Check it yourself. Hammer a nail halfway into a piece of wood, and screw a similar size screw halfway in next to it. Use the claws on your hammer to pull them out. Which comes out easier? The nail slides out, but the screw rips the wood when pulled out, and requires more force. This gripping force holds pieces together or pulls them together.

To see for yourself hammer another nail halfway into a piece of wood, and drive a screw in halfway too. Turn the board on its edge and hit the shaft of the nail, it bends sideways but stays held in the wood. Do the same to the screw and it either breaks or bends and is loose in the hole. This demonstrates the greater functional shear force of the nail as it stays tight in the hole.

Pressure treated lumber and galvanized fasteners
The copper (copper azole and alkaline copper) used in the treatment of pressure treated lumber causes a real problem when building. It is corrosive to untreated nails, screws, bolts, and structural brackets causing them to fail. Ensure you protect the brackets and use properly treated nails and screws that won’t corrode. Hot-dipped galvanized brackets, nails and screws are the recommended.

Easier to drive into wood, and to remove. Work well with a hammer or nailer. They have good shear strength, but not much grip strength. Good for framing.

More difficult to drive and to remove from wood. The wood fibers pop back into the channels between the rings to help hold it in place. However, once they break free of the holding fibers, they’re fairly easy to pull. Work well with a hammer, but require more pressure and PSI on a nailer to sink flush. Often used for plywood, roofing, siding, and underlay.

A similar drive to ring shank, but more difficult to pull until almost out, so have a good grip force. They turn like a screw as they go into the wood. Work well with a hammer, or nailer. Great for most construction uses.

Paper collation is more expensive than plastic or wire welded. Bits of paper go into the wood with the nail and don’t fly around the job site or make flags that prevent the nail from seating properly. This makes them safer to use, and they penetrate properly but need to be kept dry. 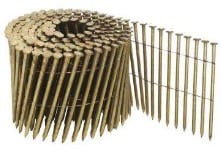 Two thin wires are welded to the nails to keep them aligned. They handle the weather and job site abuse better than paper collated nails but can bend and cause the nailer to misfire or jam. Although good at any temperature, the wire does cause flagging which prevents the nail from seating properly. It also creates dangerous flying metal pieces.

Different nailers require nails connected with paper, wire weld, or plastic to keep them correctly angled and spaced to feed. Available in a variety of nail lengths and finishes, including double hot-dipped galvanized with a smooth, spiral or ring shank.

You can also get plastic collated nails. While cheaper, they are more easily damaged and cause more jamming, flags and flying plastic; so they may not be as great a savings.

Galvanized nails are made of steel or iron and have a coating of zinc. However, how thick the zinc is, and how it is melded to the metal determines how resistant it is to corrosion.

Pro Note: Only use a smooth-faced hammer as the milled face can damage the zinc coating and cause oxidation.

What Does the Letter “d” in Nail Sizes Mean?

Historically, nails have been identified by a number followed by the lower-case letter ‘d’; they are also sold by length. The ‘d’ is the abbreviation for the Roman “Denarius” which means penny. So a 16d or 16 penny nail is 3½” long. It’s believed that in old England 1000 hand forged nails 3½” long cost 16 pennies, a 1000 nails 1” long, or 2d, would cost 2 pennies by this explanation…thoughts for another article.

The nail size is used by engineers and architects when they design buildings. It is used to meet code specifications, which are based on the wood connection strengths using a common nail. The names and sizes also allow different trades to determine what nail will work best for various tasks.

The length and diameter of a nail determine its shear strength against lateral forces. The greater the diameter and length, the more wood contact, the stronger will be the connection. If a plan calls for a 16d common nail at 12-inch centers (16d’s @ 12” o.c.) for beam or header, then that is what should be used. The common nail is thicker than a box nail, so it creates a stronger shear strength connection.

The shear strength of the 16d common is 30% greater than that of the 16d box nail, so size does matter. 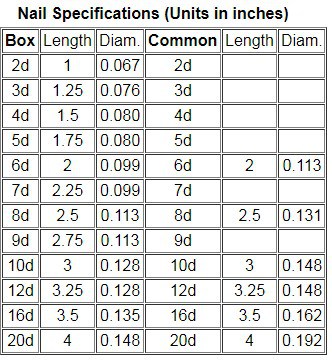 It is important to use the correct nail for the task. The most frequently used nails in construction are 16d, 10d, 8d and 6d.

How to Read Nail Sizes

The label on the box usually is full of useful information. I’ll use 4 different labels examples to highlight what they tell you. 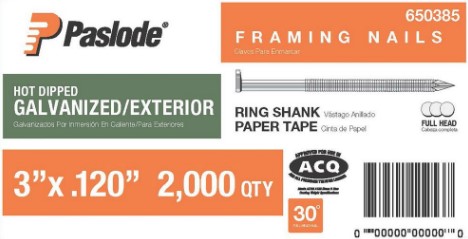 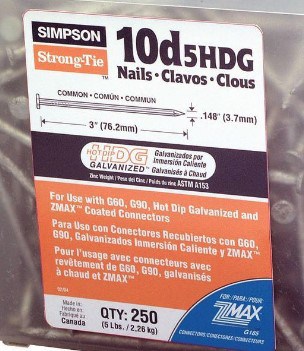 Screws are more frequently used when grip strength is needed; you need to pull two boards together or prevent a piece from lifting or separating from another – for example deck boards to joists. As with nails, there are thousands of screws to choose from, but only some that will do the shed building task you have before you.

There are a variety of different recessed drive shapes on the market. The most commonly used are the slotted, the Phillips, the square or Robertson, and the Pozidriv.

How to Read Screw Sizes

Screws are usually labeled by the gauge or diameter of the smooth shank between the head and the tread; so #8 would be 8 gauge or 5/32” or 0.164” in diameter. The bigger the number, the larger the head and shaft diameter, but not the length. Many non-imported boxes of screws now actually list the shear and grip strength on the label – more expensive but better quality.

The pitch for wood screws is fairly standardized. It refers to the threads per inch and is often known as Type AB screws. However, some have a faster or steeper pitch and are referred to as fast threads or Type A screws; they have fewer threads per inch.

Three common screw sizes for use in shed construction are below. I’ve identified the stardrive, but it could be any of the available drive styles. A flat-head means it will sit flush and wood deck screw means it is ACQ rated.

What Do the Numbers Mean? 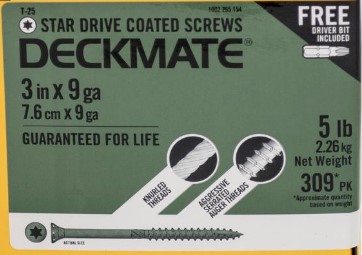 What Fasteners to Use in Different Parts of Shed Construction?

I tend to use longer nails than the code may typically require – I usually have 10d and 16d common spiral (ardox) hot-dipped galvanized nails in my tool belt when building sheds. If the nails could get wet or damp, use galvanized.

Although there are some products that state they are a construction connector or joist hanger screw, most codes don’t recognize screws due to the lower shear force rating. Simpson Strong-Tie does produce a structural hex-head fastener that is recommended for some of their brackets, but not all. If someone is going to stand on it, stay safe and us 3-inch 10d common nails.

Rafters to Walls – use 16d common spiral hot-dipped galvanized nails or #10×3½” ACQ rated screws (toenail with 3 to the plate, or end-nail with 3)

What Type and Size of Fasteners to Use with structural Brackets?

Simpson Strong-Tie fasteners are designed for many different construction applications. They are widely available and backed by a guarantee – provided the manufacturer’s instructions for use and installation are followed.

An 18-gauge zinc galvanized bracket for securing rafters or trusses to walls.

An 18 gauge galvanized twist strap like bracket for connecting rafters or joists to a wall, or a joist to a beam. 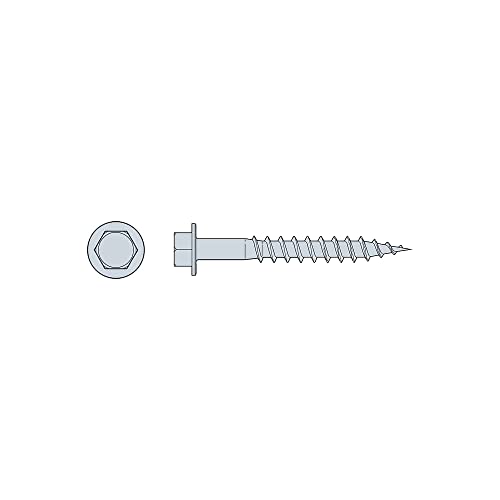 Simpson Structural Screws SD9112R100 No.9 by 1-1/2-Inch Structural-Connector Screw can be used with most Simpson Strong-tie structural brackets.

Can I Use Screws Instead of Nails for Framing?

Screws can be used for framing if they are designed for structural purposes are the same length and are equivalent diameter or greater than the nails they are replacing.

Can I Use Screws to Install Joist Hangers?

If the joists are supported by beams or plates, then end nailing to the rim or band-board makes sense. If the rim board or plates are holding up the joists, then use joist hangers. They’ll support more and are better secured with 6 to 14 nails!