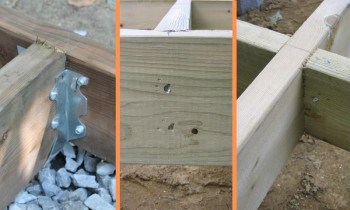 When I built my first deck a long time ago, one of the big questions was how to properly fasten the structure. Specifically, I wanted to know the strongest way to attach my joists to the ledger board and rim joists. It seemed like joist-hangers vs end-nailing vs toe-nailing was a toss-up – they all provided, what I thought, was a strong connection.

There are instances when end nailing or toe-nailing are useful, such as being used to temporarily hold a joist in place or to attach joists without having to spend extra money to use hangers and special fasteners.

Below we’ll compare the benefits of each type of connection, including the pros and cons. 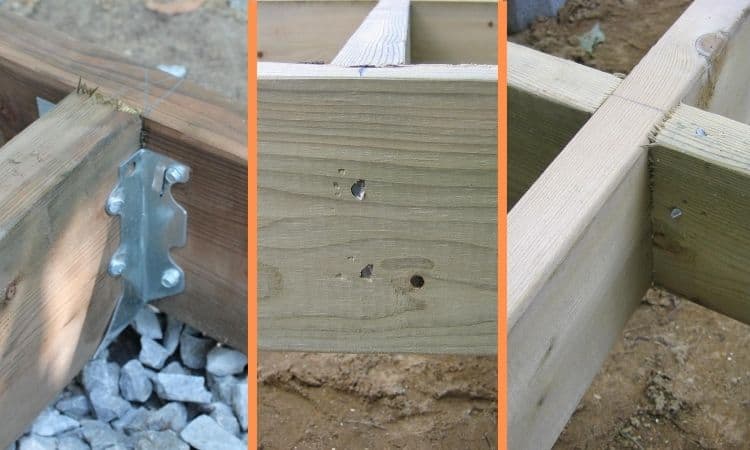 Each of these methods describes a way to fasten a deck joist to a ledger board and/or rim joist. Joists are the supports which the deck boards are fastened to and are one of the most critical structural elements of the deck, as well as many other common structures. 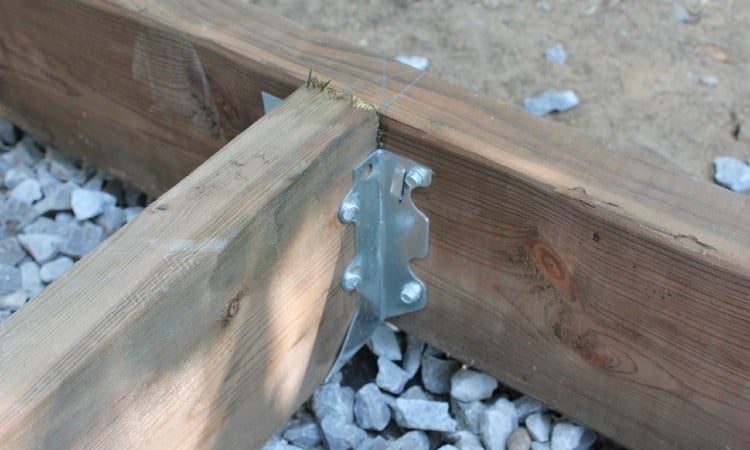 You can use either specialized galvanized bracket screws made specifically for joist hangers or simply use 8d or 10d nails, as indicated by the bracket manufacturer. Many joist hangers incorporate toe-nailing into the design, utilizing the strength of both a bracket and toe-nail connection. 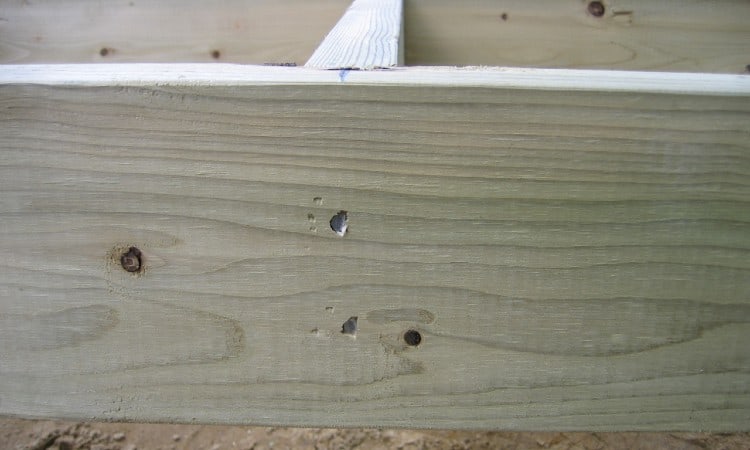 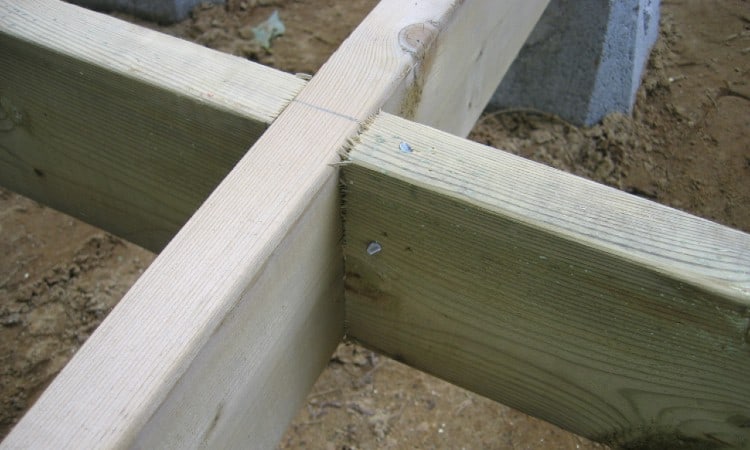 This method of fastening joists to ledger boards requires you to drive a nail diagonally through the thickness of joist’s vertical face and into the ledger board or rim joist behind it.

Proper toe-nailing also requires an appropriate amount of nails per side. If you use too many, you compromise the structural integrity of the joist. Too few, and the joist can simply fail. For a 2×8 joist, you’ll need at least 4 12d toe-nails on each side. 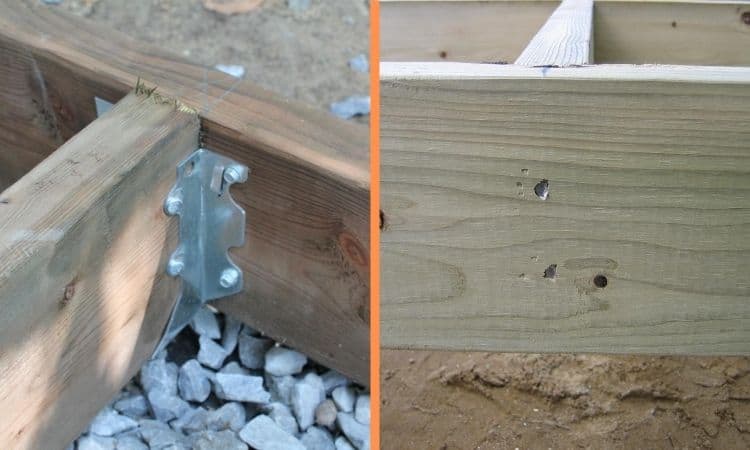 End-nailing is not valid as a primary joist to ledger board/rim joist connection. The reason end-nailing into a joist’s face-grain is not effective is because the nail or screw is being fastened with the grain.

Therefore, using a joist hanger instead of end nailing is the only viable option when building a deck. End-nailing your joists will also result in your deck not passing a building inspection, because end-nailing is not allowed for structural fastening on decks in most jurisdictions.

Another consideration when end-nailing is that you can’t end-nail joists that are attached to a ledger board. In that instance, only toe-nailing or joist hangers would work.

Joist hangers are the only option to properly affix joists to ledger boards and rim joists. End-nailing is not strong enough to support joists over the lifetime of a deck and will not pass building codes in most areas. 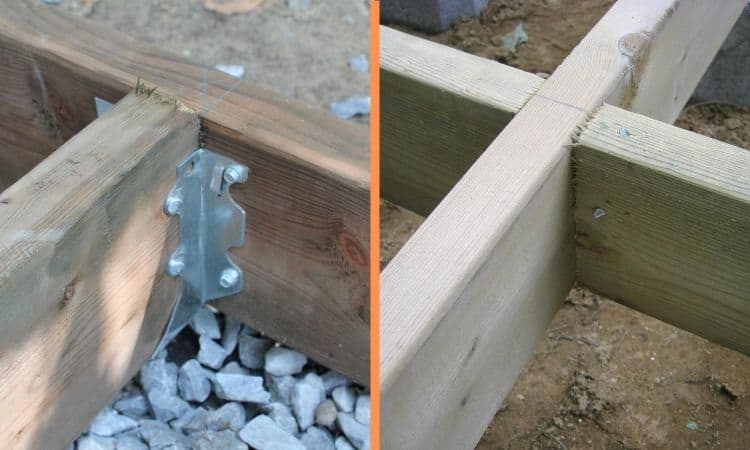 Old-school DIYers and carpenters prefer toe-nailing to joist hangers for several reasons. First, toe-nailing is cheaper and nearly as strong as using a joist hanger. Building codes also allow the use of toe-nailing, provided the correct size of the nail is used.

On the other hand, using joist hangers can be much more precise, as you install them before installing your joists. This ensures all joists will align perfectly.

Many DIYers pass on toe-nailing because aligning a toe-nailed joist is much more difficult. There is a tendency for the joist to “pull” to the side opposite, which you are nailing. This forces you to nail from both sides, back and forth, until the joist is exactly where you want it.

Also, many Simpson joist hangers incorporate toe-nailing into their design. After the hanger is affixed to the rim joist/ledger board, the hanger affixes to the joist with a toe-nail, as the slots for the nails in the hanger are angled for a toe-nail.

Joist hangers are better because they allow for more accurate placement of joists. They also allow for toe-nailing, plus support the underside of the joist. This makes the hanger stronger than a toe-nail. While joist hangers are an expense, the ease and increased strength make them a better choice.

No, joist hangers are not necessary. You can get away with toe-nailing and the building inspector won’t bat an eye.

However, toe-nailing requires more skill. You can easily erode the structural integrity of a joist with a few wrongly placed toe-nails. If this occurs, you’ll find yourself having to replace a joist because of a few poorly angled nails.

One of the classic mistakes of rookie toe-nailers is driving too many nails to correct the joist’s alignment. Too many nails results in a weak joist and a structure that isn’t to code.

If you aren’t sure about your ability to drive a perfect toe-nail every time, opt for joist hangers. You’ll have the piece of mind to know that all your joists will align and your entire deck will be stronger.

Is It Better To Use Nails or Screws for Framing Decks?

Nails are better in nearly all cases, particularly when installing joists. A regular 3 ½” deck screw has very little sheer strength. “Shear” strength refers to a screw’s ability to hold lumber, or other material, together against the force of gravity.

In other words, the screw is perpendicular to the ground, preventing the lumber from falling to the earth. This is opposed to using a screw to hold something down, in which the screw is parallel to the earth and the two members are not working against gravity.

If you are not using joist hangers, then you should only be using nails to toe-nail your joist to your ledger board and rim joist.

Should You Nail or Screw Joist Hangers?

You can do either. According to Simpson, using their structural screws designed to work specifically with their joist hangers will result in a stronger connection than using standard nails.

Load tables show that the allowable load for a floor when using the screws is somewhere around 30 pounds higher than it is with nails, per connector.

On the other hand, while 30 pounds might not seem insignificant, it also won’t likely cause your deck to collapse if you opt to use nails anyway – it’s just not a massive difference.

Therefore, you are perfectly fine to use nails with joist hangers. Since you’ve spent the money to use joist hangers, there is no reason to spend more on the specialized screws unless you are planning on hosting large amounts of heavy people on your deck regularly.

While joist hangers are a cost, the specialized Simpson SD screws are an even greater cost. You’ll need both the 1 ½” screws and the 3” screws. Depending on the size of your deck, you’ll need several boxes of each, totaling upwards of $200 or more, just for fasteners. Or you could simply buy a couple of boxes of nails for $20 and still be up to code.

Can I Use a Nail Gun with Joist Hangers?

You cannot use a regular nail gun to install joist hangers or other ties used for deck construction, such as hurricane ties or post/beam connectors. However, many manufacturers now make nail guns with exposed nail tips, allow you to place the nail tip exactly where you want it before you pull the trigger. Below we’ll take a look at a couple of options for exposed tip nail guns.

Nail guns are amazingly convenient framing devices, but one of the main drawbacks of using a framing nailer is that they are just that – a framing nailer. These tools are not designed for precision work. 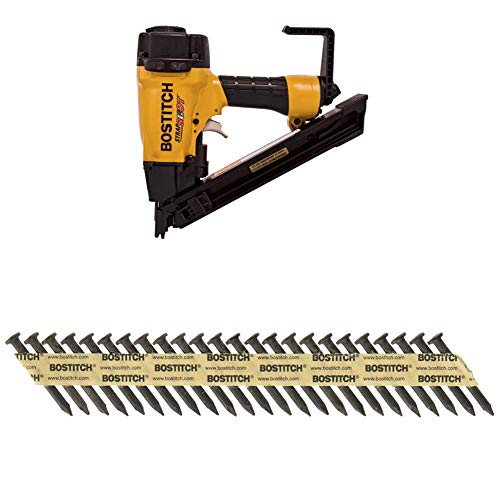 Bostich is one of the oldest and most trusted names in pneumatic nailers, and they’ve created the Bostich Strapshot exposed tip pneumatic nailer line that are designed to work with fasteners such as joist hangers, rafter ties, and any other structural connector found in a deck.

Another bonus is that the Strapshot fits between 12” O.C. joists, making nailing joist hangers much easier and potentially saving you lots of time. 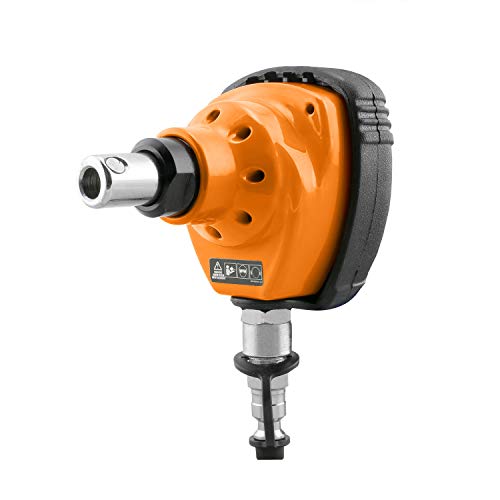 Another nailer that features exposed tip nails is the Freeman Palm Nailer. This palm nailer only holds one nail at a time, but is great for getting into hard to reach places.

It will also take nails up to 3.5” and 16d, so it can handle some pretty large nails. It’s also much cheaper than the Bostich, but it can be tedious to reload one nail at a time. 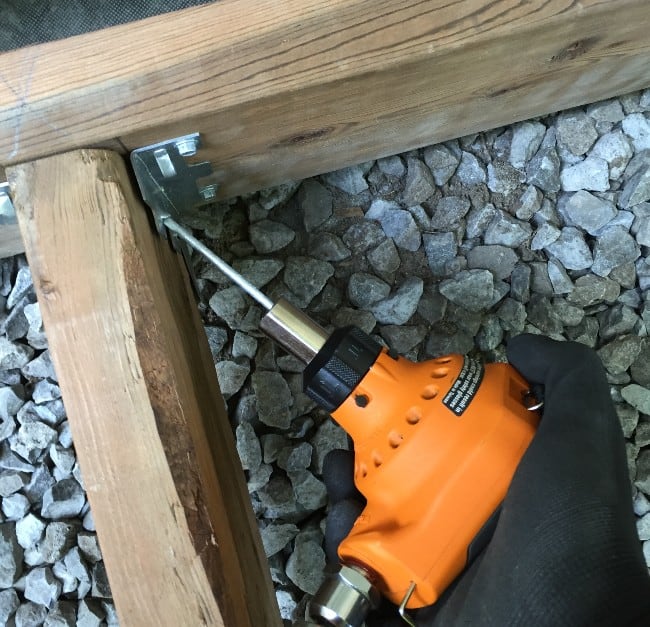 Nail guns exist for one reason – to save you time. There’s no question one of these exposed tip nailers will save you time when building your deck. Just remember that even you purchase one, you’ll still need an air compressor to actually power the tool, so there is a significant monetary investment involved.

If you opt for joist hangers, be sure to read the product details to ensure you have the right size of nail or type of screw that goes along with the connector. There are many, many different types of joist hanger, so don’t assume that one size of fastener fits with all types of the joist hanger.

As always, thanks for taking the time to read this article. Please drop me a line or comment below if you have any questions or want to share your own experiences framing the joists on your deck!