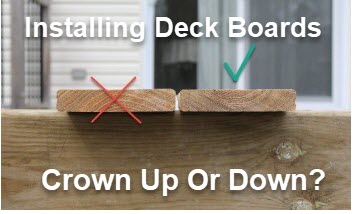 Building a deck is one of the most popular outdoor DIY projects attempted. But it’s also one of the easiest projects to screw up when installing deck boards crown up or down.

The main thing to know is how to place the deck boards properly. This then leads us to the most debated question about installing deck boards: crown up or down. The direction affects how the boards shape over time – cupping or crowning. Deck boards should crown up – bark side down.

How do you know if your board is crown up or down? And why does it matter? Read on as we get down to the grain about everything you need to know about installing deck boards. 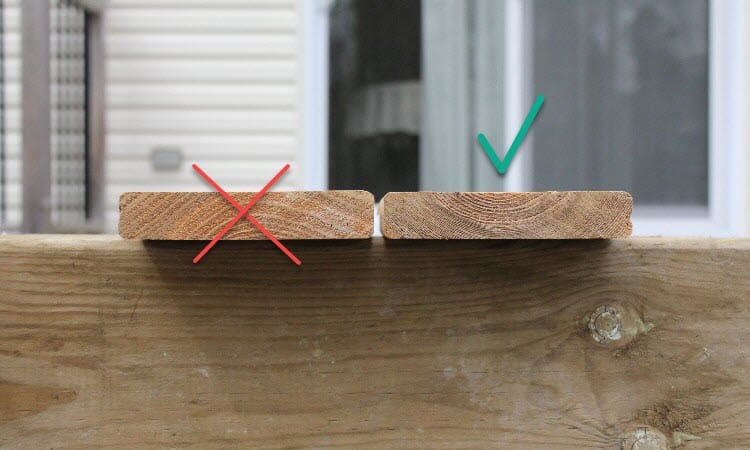 What Is the Crown Side of a Deck Board?

Not all types of deck boards will have a crown side. This term typically applies to flat grain cut boards. For a board to have a crown, the edges of the wood must arch downwards rather than curling up – referred to as cupping.

When wood gets wet, the fibers swell and retain fluid, causing the boards to bend slightly. Which direction the wood will curl will depend on what side the bark faces and the board’s grainline position.

The formation of an arch – crown – occurs when the wood bends in the opposite direction of the bark side. This arch shape allows rain and snow to slide off rather than holding the precipitation, leading to wood rot.

How to Identify the Crown of a Board

Deck Board Orientation: Which Direction – Crown Up or Down?

The orientation of your boards will affect the shape that the wood permanently forms over time. Many people don’t know this, but wood has a memory.

When wood gets wet, it does so unevenly, with the top part taking on more water exposure than the underside. This heavier exposure causes the top of the board to swell more than the bottom – forming dimensional changes.

Then, as the board loses its moisture content and dries out, it starts to shrink. The shape that the wood makes when it gets wet becomes the permanent shape of the wood once it’s dry.

When you put a board bark side up – which ironically is supposed to stop cupping – the board forms into a concave shape, which causes the board to remain in a cupped position.

Cupping is when the board edges curl upwards so that there is a bowl in the middle. If you look at the grainline at the end of the board, you’ll see the rings create a rainbow shape or a frowning upside-down smile.

Boards placed in a bark side up position – crown down – are also supposed to stop boards from experiencing shelling, which is much more common in bark side down. Shelling is when the wood starts to splinter – a defect more frequent with Southern pine and Douglas fir woods.

Crown up is the preferred installation method, despite the potential for bark side down deck boards to experience shelling. Bark side down allows for the formation of a crown warp. Once the board forms a crown, there’s less potential for the wood to hold water, which could lead to the wood splintering and rotting.

A crowned deck board means that the sides of the wood turn down, creating better drainage that helps the wood stay in good condition longer. So not only will you be happy but so will the wood, as you’ll notice from the smiling grain lines. 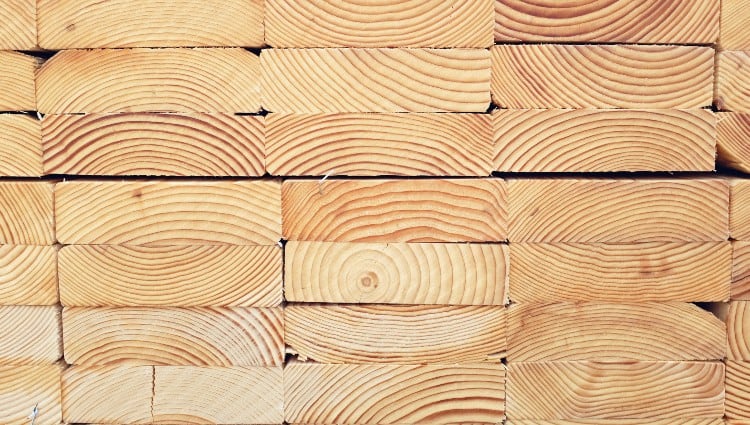 Now that you know how to identify a deck board’s crown side, let’s take a quick second to look at the three types of decking. We mentioned earlier that flat grain boards are the primary type to have a crown. Understanding the type of cut helps you figure out the crown side. During production, a log gets trimmed into three types of cuts to maximize the amount of lumber the log can produce. These cuts are heart, edge grain, or flat grain.

Wood boards cut from the center of the log – the heart – are the most expensive and attractive. These pieces have centralized growth rings, creating a dimensionally identical cut. Heart cuts are rarer, and the beauty (and cost) means you likely wouldn’t use this cut for a deck. Heart boards will not crown or cup.

Edge grain boards have the grain running perpendicular to the board’s face, which results in panels that are less likely to deform in shape. However, this type of board is also not frequently used for decks.

Flat grain is the most common and affordable deck board. This type features a curved grain line that runs parallel(ish) to the board’s wide face. The grain pattern affects how the board deforms after water exposure.

Issues from Using Wrong Side Crown

Although you now understand the different types of cuts and how to identify the crown side, you’re probably still wondering why it matters if you place your boards as crown up rather than crown down. Here are a few issues that can occur from the crown down.

Through multiple cycles of wood getting wet and drying out, the fibers experience different dimensional changes. For instance, boards often get more soaked and more swollen at the top or exposed side than at the bottom.

These changes become warps or permanent deformations. If you’ve ever seen a deck where the boards all curl upwards, often creating a tripping hazard, you’ve witnessed the issues that occur from crown-down deck boards.

When wood gets wet, the exposed fibers on top experience more expansion than the bottom, which forms dimensional changes or warping.

Shelling is also a potential with flat grain wood placed in a bark-down position. This issue occurs within the two parts of the growth ring – latewood or earlywood. The inner part of the ring grows in the early season, while the outer layer comes out later in the season.

When boards start to shell or splinter, the two layers experience separation. The boards lose structural integrity, meaning they will not be able to withstand as much weight. Not only do you have to worry about getting slivers in your skin, but you also have to worry about the boards rotting or failing.

As you can see, installing deck boards crown down – bark side up – can result in decking that becomes uneven due to warped boards. You can also experience tripping hazards, wood that breaks, or splintering as a result of cupping.

To prevent these issues, it’s best to take the time to ensure that you put each board down in the right direction – crown up or bark side down. You can also try these tips.

To clear up the age-old debate of installing deck boards crown up or down, the best course of action is to choose to put each board crown up and bark side down. When you put the crown side up, the board will arch down on the edges, making it easier for water to run off. But if the board goes crown-side down, the edges can turn up, creating cupping that can damage the decking and become a trip hazard. Remember that the grain pattern will form a smile when trying to identify the crown side, whereas if it’s a rainbow or frown, you have the crown side facing down.